Sales of Alibaba Group Holding Ltd's e-commerce business are expected to surpass those of the total retail e-commerce market in the United States by year-end, Alibaba's chairman said on Friday.

Jack Ma made the forecast during his first public appearance after retiring from the chief executive officer's position on May 10.

He added that Alibaba aims to be an innovative company just as Wal-Mart was in the last century, when the United States-based company essentially created the business-to-consumer retail model.

"Alibaba is creating the consumer-to-business retail model in this century," Ma pointed out. 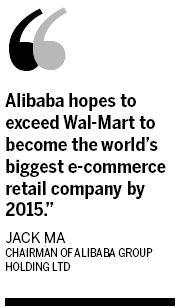 Established in 1999 as a business-to-business e-commerce website, Alibaba has matured into China's biggest e-commerce company - and expanded into finance, logistics and cloud computing, as well as the retail industry.

In the finance business, Alibaba has made loans to more than 10 million small to medium-sized enterprises in China and provided 300 million customers with payment-related services.

The company is also working with partners to build a national logistics network.

"I hope Alibaba's logistics network will cover more than 2,000 cities and towns within 10 years and deliver goods 24 hours a day," Ma said. The goal is being able to handle goods valued at 30 billion yuan each day by that time, he added.

Jonathan Lu, who took over the helm as CEO four months ago, also spoke at the Beijing event, but he declined to answer China Daily's questions on Alibaba's much-discussed initial public offering.