Chinese and international financial leaders are voicing deep concern about the drama unfolding in the United States over an increase in the country's debt ceiling, a government shutdown and the possible tapering of quantitative easing.

Christine Lagarde, managing director of the International Monetary Fund, said a failure to lift the debt ceiling will cause significant disruption and add uncertainty to the global economy.

She spoke during a panel discussion on the global economy on Thursday at George Washington University, ahead of the World Bank/IMF annual meeting, which started on Friday. 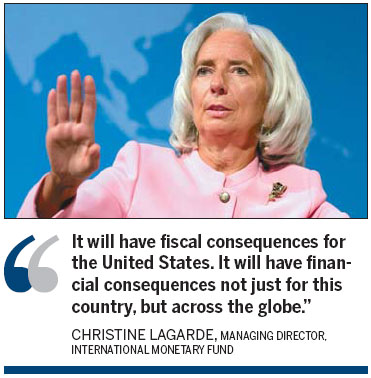 But she said she has faith that the issues will be resolved.

With the debt limit of $16.7 trillion to expire on Oct 17, Republican members of the House of Representatives on Thursday offered President Barack Obama a proposal to raise the debt limit through Nov 22, in exchange for a promise to negotiate a solution for a long-term deficit reduction and a tax overhaul, a plan the White House has shown no willingness to accept.

Yi Gang, deputy governor of the People's Bank of China, the country's central bank, also expressed his concern, saying that the market doesn't like uncertainty.

He emphasized that this is a matter related to world financial markets. He said that given the difficulties facing some emerging markets, adding this budget limit uncertainty would hurt the global economy.

"I think they should have the wisdom to solve this problem as soon as possible," he said.

China is the largest foreign holder of US government securities. Figures from the US Treasury show that China held $1.277 trillion in US treasury bonds as of the end of July, followed by Japan at $1.135 trillion.

In Brunei, visiting US Secretary of State John Kerry assured Asian nations that the US was committed to resolving the fiscal impasse as leaders from China, Japan and several other countries expressed their concerns over the US government shutdown and possible debt default.

Lagarde also hopes the US Federal Reserve will approach its tapering, or an end of easy money, in a gradual and cautious way.

"We recommend gradual, well-communicated dialogue between the authorities," she said, pointing to signs of an emerging spillover effect already seen in countries such as India, Brazil, Russia and South Korea, where capital inflows have been significant.

An IMF regional economic outlook report for Latin America and the Caribbean said expectations of lower medium-term growth in China have been a key driver in the softening of global commodity prices since the beginning of the year.

He agreed that tapering must be dealt with in an orderly, well-communicated way, and he expressed the hope that countries can solve their budget issues.

"We need a very stable global economy," he said. "Also, more importantly, China needs foreign trade and investment. We really think that protectionism is bad for the world as a whole," he said.

Yi dismissed concerns that China's economy is heading toward a hard landing.

He predicted that this year's growth will be above 7.5 percent, with the probable figure at 7.6 percent.

"For the foreseeable future, I think China's growth will be around 7 percent," said Yi, adding that it is still very rapid development by world standards. China had long maintained a GDP growth rate of more than 10 percent.

While Lagarde expressed concerns about the risks of shadow banking in China and the US, and called for more supervision, Yi said on Thursday that the problems regarding shadow banking and local government debts are under control now.

Yi described the China (Shanghai) Free Trade Zone as a pilot program for broad reform and the opening-up policy in China, including financial reform. But he said that in a very small place, it's very difficult to carry out financial liberalization because funds can move around.

"So in this free trade zone, financial reform will be carried out in a gradual manner," Yi said.

G20 urges US to act quickly to avoid default

China can learn from US in shale gas exploration