Latest: The BBC said on its website that it saw a text message sent to families saying it had to be assumed "beyond reasonable doubt" that the plane was lost and there were no survivors. 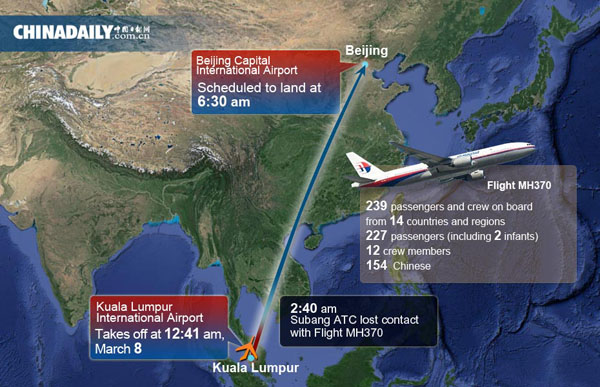 New satellite analysis from Britain had shown that Flight MH370, with 239 people on board, was last seen in the middle of the Indian Ocean west of Perth, Australia, he said in a statement.

"This is a remote location, far from any possible landing sites," Najib said.

"It is therefore with deep sadness and regret that I must inform you that, according to this new data, Flight MH370 ended in the southern Indian Ocean."

Najib added that the families of those on board had been informed of the developments.

His comments came as an Australian navy ship was close to finding possible debris from the jetliner after a mounting number of sightings of floating objects that are believed to parts of the plane.

The objects, described as a "grey or green circular object" and an "orange rectangular object", were spotted on Monday afternoon, said Australian Prime Minister Tony Abbott, adding that three planes were also en route to the area.

Flight MH370 vanished from civilian radar screens less than an hour after taking off from Kuala Lumpur for Beijing on March 8. No confirmed sighting of the plane has been made since and there is no clue what went wrong.

Attention and resources in the search for the Boeing 777 had shifted from an initial focus north of the Equator to an increasingly narrowed stretch of rough sea in the southern Indian Ocean, thousands of miles from the original flight path.

Over 150 of the passengers on board the missing plane were Chinese.

In a further sign the search was bearing fruit, the US Navy was flying in its high-tech black box detector to the area.

The so-called black boxes - the cockpit voice recorder and flight data recorder - record what happens on board planes in flight. At crash sites, finding the black boxes soon is crucial because the locator beacons they carry fade out after 30 days.

"If debris is found we will be able to respond as quickly as possible since the battery life of the black box's pinger is limited," Commander Chris Budde, US Seventh Fleet Operations Officer, said in an emailed statement.

Investigators believe someone on the flight shut off the plane's communications systems. Partial military radar tracking showed it turning west and re-crossing the Malay Peninsula, apparently under the control of a skilled pilot.

That has led them to focus on hijacking or sabotage, but investigators have not ruled out technical problems. Faint electronic "pings" detected by a commercial satellite suggested it flew for another six hours or so, but could do no better than place its final signal on one of two vast arcs north and south.