The numbers tell the tale.

Chinese buyers scooped up more than $11 billion of US residential real-estate properties in the year ended March 2013, paying a higher than normal median price of $425,000, according to the National Association of Realtors. What's more, nearly 70 percent of the transactions were all-cash.

The buying spree has led Zillow Inc, a major US online real-estate service, to form a partnership with Chinese real-estate portal Beijing Yisheng Leju Information Services Inc. The companies plan to launch a jointly branded website in China this summer to give homebuyers access to Zillow's US property listings translated into Chinese. Financial terms of the partnership weren't disclosed.

As the second-largest source of foreign purchases of US homes behind Canada, China is "a market with tremendous interest in the US," Errol Samuelson, Zillow's chief industry development officer, told China Daily.

Notwithstanding a surprising climb in US housing prices after the economic downturn, "the US market still has very affordable home prices," Samuelson said. "We expect the Chinese buyers to be more important and more influential in the coming two years than they were even in the previous two years."

Leju CEO Geoffrey Yinyu He said "many of our 60 million users are interested in US properties". The Zillow agreement "provides an additional sales channel for US brokers to tap into the huge pool of Chinese customers," he said in a statement. 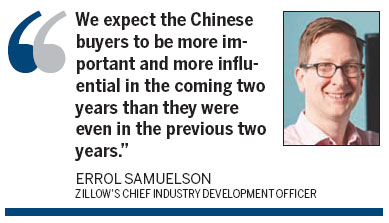 With listings to more than 2 million US residential properties, Zillow functions as a middleman, providing a platform to connect potential buyers to agents or home sellers. The Seattle-based company, which went public in an initial public offering in 2011, makes its money from advertising. Zillow had nearly 70 million monthly unique users in January, according to a press release.

The international partnership is Zillow's first. Samuelson said the idea of translating the US property listings into Chinese is to "make it easy for the person who is in China to feel very comfortable with the interface."

Leju will add a US property search box within the primary navigation bar on its website, while the Zillow-created co-branded website will connect both sites, according to a release. Leju users can be directed to Zillow's home information search platform in the US. In addition, Leju will have the right to place display advertising on the co-branded website.

Leju's operating company, Leju Holdings Ltd, is a unit of E-House (China) Holdings Ltd, a real-estate services company in China with a nationwide network covering 255 cities, according to a release. The company's shares trade on the New York Stock Exchange.

The partnership comes as Chinese real-estate investment continues to increase globally. Wealthy individuals eager to diversify their holdings have increased their buying in major markets such as Singapore, London and Dubai.

Chinese developers have responded to this demand by expanding operations to the US and other countries. For example, China Vanke Co, China's largest property developer by revenue, in February said it would team up with RFR Holdings and Hines of the US to develop a 61-story condominium project in midtown Manhattan. The Shenzhen-based company already has joined forces with New York developer Tishman Speyer in a pair of condo towers being built on the San Francisco waterfront.

Much of the Chinese home buying in the US has been aimed at snapping up bargain-priced houses in a struggling economy. Some buyers seek houses in cities with large Chinese populations, such as New York, Los Angeles, Chicago and San Diego, California. Others shop for homes near colleges their children can attend. Chinese buyers also use real estate as a safe haven for money as they diversify their investments.

"They are buying significantly above the median that you would normally expect in the United States," Samuelson said.

US home values are expected to continue their upward trend this year, on the heels of last year's surprising comeback, which was fueled by low inventories and historically low interest rates. Mortgage rates are also expected to climb, however, potentially crimping buyers' abilities to afford new homes.

Samuelson said he thinks the partnership will be "a massive win for Leju and their customers. But also for the real estate agents and brokers in this country who know there is this pent up demand out there but don't have a way to tap into it," the executive said.

Samuelson said Zillow also hopes to benefit from mobile communications devices taking on an increasingly important role in buyers' lives. "Ten years ago, maybe half of them were not looking for real estate online. These days, 89 percent of consumers start their search online, and mobile has had a big role in accelerating that," he said.

G20 to focus on boosting global growth, not Crimea -official

US says Iran's pick for UN envoy is `not viable'