China remained the United States' largest foreign creditor in March, trimming holdings of US Treasuries by just $800 million while No 2 Japan dumped $10.6 billion of US debt.

It was the third straight month that China reduced its US Treasury holdings. Overall foreign capital inflows into US Treasuries declined, with strong demand coming mainly from Belgium, which continued its heavy buying of US debt. Russia was the largest seller during the month amid speculation that its assets would be frozen as part of sanctions over the crisis in Ukraine.

China's cut "was marginal, so I would not read too much into it," said John Praveen, chief investment strategist with New Jersey-based PrudentialInternational Investments Advisers LLC. "Compared to some of the bigger changes that other countries such as Japan and Russia made, what China did is not really significant."

China held $1.2721 trillion in US debt in March, down from $1.2729 trillion a month earlier and declining from $1.2756 trillion in January, the Treasury Department said Thursday.

Belgium added $40.2 billion. The European nation has doubled its holdings in the past year to $391.4 billion and is the US's third largest foreign creditor after China and Japan. 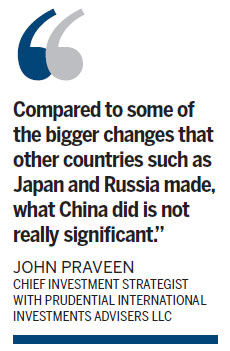 US residents increased their holdings of long-term foreign securities with net purchases of $5.3 billion.

China's relatively small cuts in US Treasuries suggest that the country's economic strategy remains largely unchanged despite its leaders' stated intention to de-emphasize investment and exports in favor of a more sustainable growth model based on consumption and services, Praveen said.

"If you look at the underlying data it doesn't look there is a big rebalancing going on. It's probably going to take several quarters before you can see any change," he said. "It's like a supertanker that is trying to change course. It's not like a speedboat trying to change direction."

Additionally, the Chinese government's corruption crackdown has "basically added a little bit of a damper on consumption spending", the economist said.

"They are still exporting, so they have export earnings" to put into US Treasuries, which are considered a safe investment, Praveen said.

China summons US ambassador over indictment