Ping-pong opened his door to China

Douglas Spelman was a student at Harvard University in 1972 when he learned that a Chinese ping-pong team would visit the United States that spring. The PhD student of history and East Asian languages, who was then taking time teaching a course on China at Bucknell University in Pennsylvania, wanted to get involved.

However, when he went to New York to talk to Preston Schoyer at the National Committee on US-China Relations, which was to receive the Chinese delegation, he was told they already had enough people.

Luckily, Schoyer still let Spelman join the team of American interpreters for the ping-pong delegation, the first official Chinese sports delegation to the US since 1949.

"We were not able to go to China, and there was no contact between US and China. So this was the first time and it was very exciting to be part of the trip," Spelman recalled.

But he and his American interpreter colleagues knew they could not match the professional Chinese interpreters. Spelman himself had had limited chances to use his spoken Chinese for several years. Nonetheless, they were able to facilitate communication in many ways to smooth interaction between the Chinese delegation and Americans they met.

Doing mostly informal interpretations for the ping-pong team traveling across the US, Spelman was glad to see the players welcomed by Americans. "People were very excited about them, despite the fact that we had been separated for 20 years, and were enemies and fought each other in the Korean War," he said.

That trip took the ping-pong team to several cities, including Detroit, Williamsburg, New York, and San Francisco in April 1972, as Spelman remembered vividly.

The private plane circled the Grand Canyon, and the players visited the Universal Studio in Los Angeles and vineyards in Napa Valley, meeting people like legendary winemaker Robert Mondavi.

That volunteer work for the ping-pong team quickly paid off when in 1973, Spelman, still a Harvard student, and several of the American interpreters were granted visas to visit the People's Republic.

"We had a good, wonderful trip," Spelman said of the month-long visit that he and his wife Nancy went on with the other Americans.

They not only visited attractions in Shanghai, Beijing, Xi'an and Guangzhou, but also went to places such as a May 7th cadre school in Shashiyu outside Beijing, where cadres were receiving the so-called re-education from peasants and workers during the "culture revolution" (1966-76).

Spelman was at Harvard during a great time when John Fairbank and Benjamin Schwartz, two prominent scholars on China, were teaching there. In fact, Fairbank was his PhD adviser and suggested that he should write his dissertation on Cai Yuanpei, a prominent Chinese educator and politician.

He had applied for graduate school to study China largely due to his fascination with the Chinese language and culture after graduating from Oberlin College in 1963 with a religion major. Finding the prospect of becoming a minister in church less attractive than he previously had thought, he took an opportunity to teach English in Taiwan for two years, a decision Spelman described as "Peace Corp motivation" but clearly changed the course of his career.

Having enjoying the life in Taiwan, Spelman applied for a job managing the Oberlin College in Taiwan program after completing his PhD degree at Harvard in 1973. He also taught a Chinese intellectual history course to those students.

After a year in Taiwan, Spelman and his family, his wife Nancy, a psychologist, and daughter Brooke moved to Hong Kong where he was managing the Yale University in China program at the Chinese University of Hong Kong. Their second daughter Erin was born there in 1975, and Nancy earned her PhD in psychology at Hong Kong University.

In the 1970s, Hong Kong was a hot destination for Americans engaging in China study since they could not travel to the Chinese mainland.

His stay there from 1974 to 1977 was in critical years in Chinese history when top leaders Mao Zedong and Zhou Enlai died, and Deng Xiaoping was experiencing ups and downs.

Seeing several Yale students taking US Foreign Service exams in Hong Kong, Spelman wanted to give it a try too. "My wife and I thought we would try it for five years and see how it was. I stayed for 30 years, and I liked it," said Spelman, who retired from the Foreign Service in 2007.

For Spelman, it was all an interesting time for someone who has studied China. He took his first job following China and the third world in the State department's Bureau of Intelligence and Research at a time when the two countries were normalizing their diplomatic relations.

This time he was assigned an informal interpreter's job when former Chinese leader Deng Xiaoping visited Washington in 1979 and stayed at Blair House in Washington. He saw both Deng and his wife Zhuo Lin.

"For those of us studying China, it was very exciting because the relationship was developed in a positive way," Spelman recalled, adding that this was despite problems such as frozen assets had to be sorted out before a formal diplomatic tie.

Spelman went back to Hong Kong in 1979, this time working at the US consulate for four years, first in the consular section and then the economic section, analyzing the Chinese economy.

China's economy was barely open at that time. But Spelman said the feeling was exciting. "Changes were taking place. We were very excited. It looked like China was moving toward more like us," he said.

He continued his work at the economic section in the US embassy in Beijing from 1983 to 1985 when he was dealing with specific areas, including aviation and energy, and postal exchanges.

Since then, he has served in various posts in the Chinese mainland, Taiwan, Hong Kong and Malaysia and Singapore, including witnessing the Hong Kong handover of its sovereignty to China from Britain in 1997.

After serving as US consul general in Shanghai from 2002 to 2005, Spelman went back to the intelligence and research bureau, coincidentally his first and last job at the State Department.

Witnessing the China-US relations evolving in the past half century, Spelman said the relationship is in a difficult time now. 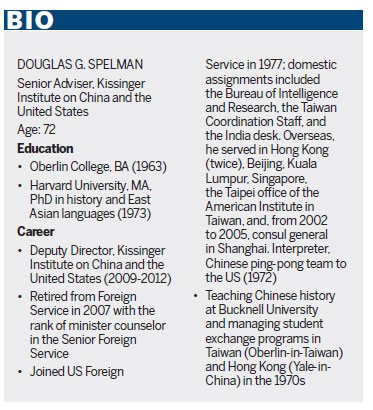 He believes the two countries really need to find ways to adjust to the reality of China as a rising power and the US the predominant status quo power.

"I think we really need to do that, but it's not easy," he said.

To Spelman, many Chinese are not comfortable with the US being the predominant power, while many Americans are not ready to give China a bigger say.

He suggested the US side needs to be more sensitive to Chinese feelings, and described the US surveillance along China's coast as "provocative."

He also expressed puzzlement over the recent tensions between China and its neighbors in both the South and East China seas, tensions that he said do not serve China's interest and have the potential to draw US and China into armed conflicts.

He felt discouraged that the two countries' relationship has not advanced as many had expected after last year's historic summit between Presidents Xi Jinping and Barack Obama at the Sunnylands estate in California, despite so many positive interactions in the relationship.

"Both sides need to give the highest priority to try to work this thing out. Conflict is almost unimaginable," he said.

Spelman praised China's economic development in the past decades as a wonderful achievement.

He is, however, concerned about issues such as environmental degradation and the widening gap between the rich and poor.

"I have worked on China for a long time, I really want it to succeed, and I think there is good evidence that it will succeed in meeting these challenges."