The newly released water pollution prevention and control action plan will put tough controls on polluting industries with emission limits and provide stricter supervision from authorities and the public.

A series of detailed regulations will need to be subsequently released to make the guidelines operable, an expert suggested.

Emission of water pollutants will continue to grow, but more slowly, and the tipping point for the overall improvement of water quality has not yet been achieved, said Chen Ming, deputy head of the Water Resources Bureau under the Ministry of Water Resources.

He said peak water consumption will be reached around 2030 and will be held within 700 billion cubic meters annually.

The plan lists 10 major polluting industries that will have targeted emission reductions.

All the outdated capacity in these industries will be phased out, and projects will be restricted to reduce emissions of water pollutants.

There will also be efforts to improve water consumption efficiency in industrial production. 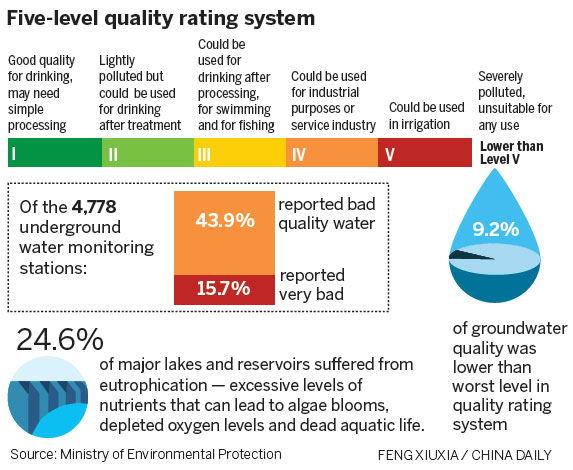 Water consumption per dollar value of industrial added value was at least two times that of developed countries, and the effective utilization of water in irrigation was 0.52, lower than the world average of 0.7, the Ministry of Environmental Protection said.

In addition, the plan outlines principles to prevent and control pollution for underground water, bays, rivers and lakes, laying the foundations for management of water pollution, said Wu Shunze, deputy head of the Chinese Academy for Environmental Planning.

There will be a series of detailed regulations to follow, he said.

According to the plan, governments are required to release water quality statistics regularly to the public. Cities will make the data public in 2016, and all counties will release the numbers in 2018.

In Beijing, drinking water quality can be tracked on the website of Beijing Waterworks Group.

There is a long way to go to reach the goal, considering the majority of cities do not provide the information, but it is not hard to achieve with the help of comprehensive efforts in the implementation of the action plan, Wu said.