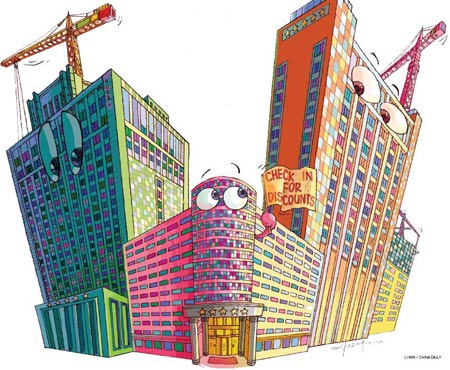 China is witnessing an unprecedented boom in hotel construction that is changing the face of the global hospitality industry. The country will have the highest number of hotels under construction and room openings in the world for each of the next two years, according to figures released last week by Lodging Econometrics, the US-based hotel retail estate market analysts. It has some 1,182-hotel projects under construction, compared to just 754 in Europe as a whole.

The leading international hotel chains are all making major investments. Hilton Worldwide, the US-based chain that currently has 17 operating hotels in the country, announced in April it was planning to have 100 hotels running within five years. This followed on from a statement by Marriott International, the Bethesda, Maryland-based operation, that it wanted to double the number of its hotels to 90 by 2015.

InterContinental Hotels Group (IHG), based in Denham, Buckinghamshire in the UK, has also revealed it wants to increase the number of its rooms in China eightfold over the next 20 years.

The buoyant mood of the China hotels sector was reflected last week at the Asia Hotel Investment Conference, held in the splendor of The Venetian Hotel in Macao, itself the largest hotel building in Asia.

"I don't think anyone could do it. There are cities that even I have never heard of. The domestic travel market is so huge and (hotel) developers do not reveal their plans until the last minute," he says.

"We are very bullish about the sector as a whole. Just the sheer size of China means you are going to get a lot of activity in the hospitality sector."

One of the big drivers of hotel development in China has been major international events such as the Beijing Olympics, the Shanghai Expo and the 16th Asian Games in Guangzhou last year.

This has led to significant overcapacity in the high-end five-star hotels market, which has led to low room occupancy rates and has driven down room tariffs to a quarter of the level commanded by similar properties in Europe (see inside cover story).

Foreign readers are invited to share your China stories.

Singing up a revolution

Welshman makes a good living with songs that recall the fervor of China's New Beginning.

The sky's the limit