Carlyle Group LP, one of the world's largest private equity firms, said on Wednesday that it purchased a 13.5 percent stake in Meinian Onehealth Healthcare Co Ltd.

The move underlines Carlyle's confidence in the development of preventive healthcare checkup services in China and the role private medical agencies play. 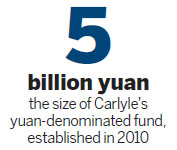 The investment capital comes from Carlyle's yuan-denominated fund totaling 5 billion yuan ($789.24 million), which was established in 2010 with Beijing's municipal government, but the detailed amount was not provided.

"The preventive healthcare checkup service industry of China is growing at 15 percent a year," said Feng Junyuan, managing director of the Carlyle Group.

"Private medical agencies are playing an increasingly important role in the market. Meinian Onehealth is a prominent market player with an extensive national clinic network and an experienced management team," she added.

According to Feng, in addition to providing a global platform for sharing knowledge and best practices, Carlyle will leverage its healthcare industry expertise to support Meinian Onehealth's business development and expansion plans, develop its service offerings and enhance its position in the fast-growing healthcare industry.

"Public hospitals are still a main player in the industry while private medical institutions are developing faster at an annual growth rate of around 30 percent," Yu said.

"The partnership with Carlyle will enable us to focus on developing business through clinic network expansion and service differentiation, as well as exploring more value-added initiatives to meet the growing demand in China," said Yu.

Founded in 2004, Shanghai-based Meinian Onehealth became China's largest private provider of preventive healthcare checkup services in 2011. The company owns a network of 83 clinics in 41 cities, including Shanghai, Beijing, Tianjin, Shenzhen and Chengdu. About 20 of them will open by the end of 2012.

According to Yu, the company will serve more than 3 million individuals this year. By the end of 2015, it is expected to have 300 clinics around China.

Meanwhile, Beijing-based Ciming Health Checkup Management Co Ltd, a leading private provider of checkup services, is preparing for its IPO in the Shenzhen Stock Exchange. According to a prospectus, released on the website of the China Securities Regulatory Commission in March, Chinese equity investment firm CDH Fund invested 9.8 million yuan in the company in 2005 for a 39.5 percent stake.

The prospectus also said that the Chinese health checkup market registered 287 million visits in 2010, an increase of 24.8 percent from the previous year.

In late 2007, iKang Guobin Healthcare Group - another Beijing-based preventive healthcare checkup service provider - received investments from investors including Merrill lynch and ePlanet Ventures totaling $25 million. By the end of 2011, the company had 25 clinics in China.

Li Jinghu, deputy director of the Institute of Social Security at the Ministry of Human Resources and Social Security, told China Daily that health checkup services are not expected to be included in medical insurance packages.

But he said that China is encouraging more investors to take part in the industry.

Including the domestic fund, Carlyle has invested about $4 billion in more than 60 deals in China. Carlyle was among the first global firms to announce it had raised a yuan-denominated fund.