Slump due to economic slowdown, especially in the European markets

Chinese enterprises' net income and revenue growth for 2012 fell sharply due to the economic slowdown, Fitch Ratings said in a report.

According to Fitch's analysis, which is based on a sample portfolio of 40 Chinese corporations, their net income growth fell by 11 percent in 2012.

The portfolio can be broken down into 15 State-owned enterprises and 25 non-governmental businesses.

The analysis focuses on the aggregate, average and median performance of Fitch's portfolio of the 40 Chinese companies in an attempt to present some overall trends and conclusions.

Fitch forecasts the average net income growth for the 40 corporations will slow to just 0.1 percent in 2012 from 10 percent in 2011.

The fall in net income is broadly in line with China's recent overall economic performance this year, the report said.

Although both the Chinese official purchasing managers' index and HSBC's Purchasing Managers' Index rose above the crucial reading of growth or decline in October, showing signs of recovery, China's economic growth is set to slow down this year. 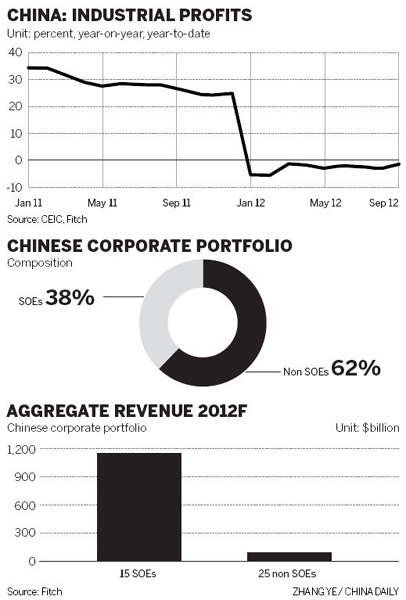 Royal Bank of Scotland expects China's gross domestic product growth to be around 7.6 percent in 2012 and, with a modest recovery, around 8 percent in 2013, the bank's China economist said.

This forecast is below the consensus opinion. Quite a number of economists believe the country's GDP growth could still reach 8 percent this year.

"We think export growth will face some headwinds from the subdued global growth outlook for 2013, especially for the European Union, China's largest export market," said Louis Kuijs, China economist with the Royal Bank of Scotland plc.

China's industrial profits fell by 1.8 percent year-on-year over January to September 2012, underlining the possibility of negative growth for the full-year 2012. This contrasts with strong profit growth of 40 percent in 2011 and 50 percent in 2010.

Revenue growth for Fitch's portfolio is set to slow in 2012 and to continue downward in 2013, the report showed.

Profitability growth is significantly lower than that achieved in 2011 and 2010 but clearly remains in positive territory, the report showed.

The financial performance of different industries will further diverge.

J.P. Morgan Research Analyst Sentiment Index (JSI) for China in November is 49.2, compared with the October reading of 61.2.

A notable change in the November reading is weakening in sentiment for property, telecom, oil and gas, which are the heavyweight sectors in the MSCI China basket, according to the research.

On the other hand, sectors tilted toward domestic demand, including gas, registered improving sentiment.

While the November JSI eased rather notably from the October level, the November reading remains above the September and August levels.

Meanwhile, sentiment on inventories and earnings per share revision continue to improve, J.P. Morgan said in a report.

"The recovery in industrial activity appears to be gaining traction, supported by policy easing and stabilization in the housing market. External demand has also improved in the near term," said Zhu Haibin, chief China economist and head of Greater China Economic Research at J.P. Morgan.

"This likely suggests that, at the micro level, the operating environment for corporates is improving along with the macro indicators in recent months, but probably at a more gradual pace," Zhu added.