The risk element of local government funding vehicles is well under control, said Shang Fulin, head of the China Banking Regulatory Commission in an interview with CCTV on Friday.

Shang said in general the risk exposure of lending to local governments is small because most of the loans are long-term and contained by effective regulations and controls.

It is possible that there will be defaults on some lending to local governments. The commission will classify the lending and take various measures to manage it, said Shang.

By the end of June, outstanding loans via local government funding vehicles stood at 9.7 trillion yuan ($1.57 trillion), up 6.2 percent year-on-year. The growth rate was 9 percentage points lower than the average growth rate for all categories of banking loans, according to the commission's data.

"Most of the new lending to local government funding vehicles in 2013 went to projects that are in their final phase. As the total amount of lending increases, low efficiency of the use of funds and a lack of solvency may be observed," a note from the commission released on Friday said. 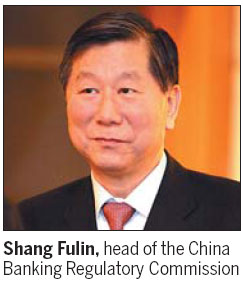 Shang said the commission will take various measures to manage the risks of lending to local government funding vehicles, including controlling the total loan amount, increasing asset-backed financing and establishing a long-term mechanism to push forward the optimization of the credit structure of local governments.

The precise amount of regional and local government-related debt outstanding is unknown. In June, the National Audit Office published a more limited survey of 15 provinces, three municipalities, 15 provincial capital cities and three districts. It showed their debt had continued to rise but at a relatively modest level of 13 percent over the two years up to 2012, the note said.

In response to mounting concerns over trusts and wealth management products - which are considered to be "shadow banking" by many people - Shang said the risk element in these products is controllable.

"Growth rates of such products are not significant. The balances of these products are basically the same as that of last year," said Shang.

Shang said risk pressures increased in the first half of 2013 when there was a slightly higher non-performing loan rate at 0.96 percent because of the short-term volatility of the money market.

Lenders need to keep a close eye on their liquidity management, said Shang.

"The liquidity crunch in June was a lesson to lenders that at all times the management of lenders must follow the principle of prudence. Safety and liquidity are always vital in the banking sector and financial system," said a CBRC note on Friday.

US issues travel alert over attacks

US urged to ease exports ban