By He Dan (China Daily) 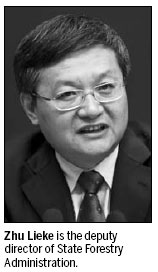 BEIJING - Although government efforts to control desertification in China have been effective, it will take about 300 years to reclaim the land swallowed by deserts at the current rate of progress, a senior official said on Tuesday.

About 530,000 square kilometers of desert areas in the country can be returned to green land, said Liu Tuo, director of the national bureau to combat desertification under the State Forestry Administration, at a news briefing held by the State Council Information Office.

However it will take about 300 years to achieve the goal at the current rate of 1,717 sq km a year, Liu added.

The desertification trend in China has not been completely reversed, although the desertified land area has decreased by 12,454 sq km in the past five years, said Zhu Lieke, deputy head of the administration, on Tuesday.

Results of monitoring conducted from 2009 to 2010 across the country showed that the net reduction of sandy land was 8,587 sq km in that period.

However China has 2.6 million sq km of desertified land, which accounts for about 27.3 percent of its total land area.

In addition, about 18 percent of China's land remains eroded by sand.

"China is still a country with the largest area of desertified land in the world. As well, about 310,000 sq km are susceptible to desertification," said Zhu.

Zhu said overgrazing, excessive reclamation, inappropriate use of water resources coupled with scare rainfall have resulted in the expansion of desertified land in the northwest part of Sichuan province and areas in the lower reaches of the Tarim River.

The ecological pressure from the country's huge population and economic development are still major barriers to halting desertification, Liu said.

Liu also pointed out that global climate change is another barrier to reversing desertification as more extreme weather, such as drought, leads to degradation of vegetation.

Thanks to comprehensive measures and consistent efforts, the ecological environment has greatly improved in some key eco-rehabilitation areas, including desertified land in Horqin Grassland and Mu Us Desert in the Inner Mongolia autonomous region, Zhu said.

Based on a blueprint first unveiled by President Hu Jintao at a United Nations climate summit in September 2009, China will seek to increase its forest coverage by 40 million hectares by 2020 and increase the amount of wood stock by 1.3 billion cubic meters from the level of 2005.

Zhu said China will try to achieve the above goals through increased investment from all levels of government, application of new technology and more incentives for the public to participate.

The central authorities will spend 220 billion yuan ($33 billion) in the next decade to protect the natural forests in China, the State Council revealed in December 2010.