Caught in the Web of rumor and innuendo

A series of arrests of high-profile micro-bloggers has sounded warnings bells for China's Internet commentators, as Zhang Lei and Yang Yang report from Beijing.

The arrest of Xue Manzi, a 60-year-old "celebrity" with more than 12 million followers on Sina Weibo, China's equivalent of Twitter, on charges of soliciting a prostitute has triggered a heated online discussion nationwide.

The widespread attention has tarnished the positive image Xue has been building for several years. The United States' national is an angel investor who provides financial backing for small startups and entrepreneurs. He is also an online opinion leader who has used his micro-blog to advocate a crackdown on child trafficking and promote free lunch projects for children in poor areas. Xue has also requested financial help to provide treatment for teenagers with leukemia. 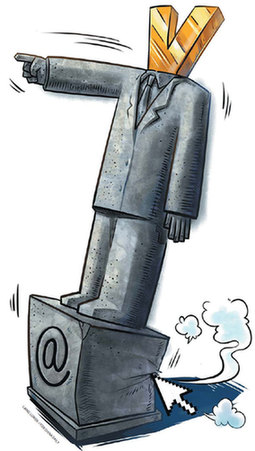 However, further investigations by the police suggest there is a darker side to Xue's character. In addition to soliciting prostitutes, he has also been accused of "group licentiousness" and is alleged to have frequently organized group sex parties. He told the police that he was addicted to group sex long before he arrived in China, according to Xinhua News Agency.

Ge Zhongming, a professor at the School of Philosophy and Social Development at Shandong University, said when micro-blog celebrities such as Xue fall, great damage is done to "society's systemic trust", as opposed to the interpersonal trust with which we are all familiar, and this can affect social psychology en masse.

"From a sociological perspective, these V celebrities (verified account users, obliged to submit personal information to the company that operates the micro-blog and whose avatars are accompanied by a V-shaped badge) are an access point to society. If they lose the trust of the public, whether by disseminating rumors or through a promiscuous personal life, social credibility as a whole will suffer from the collateral damage brought about by their tarnished images," said Ge.

Three days before his arrest, Xue posted the following on his micro-blog: "While the Shanghai judges are striving to lose the label of 'whoremasters', Li Shuangjiang (a famous singer in China and dean of the Music Department of the People's Liberation Army Academy of Arts) is doing his best to earn his son the same label."

Xue was referring to two sex-related scandals that have captivated the public this summer. Earlier this month, four senior judges in Shanghai were caught on security video as they solicited prostitutes. They lost their jobs and now face expulsion from the Communist Party of China.

Meanwhile, Li Shuangjiang is attempting to save his son Li Tianyi, who is accused of participating in the gang rape of a woman at a Beijing hotel in February, by insinuating that the victim, a bar hostess, is a prostitute and had sex with his son of her own free will. Li Tianyi's trial began on Wednesday at Beijing Haidian District People's Court.

While the nation was still digesting those events, Xue was dragged into his own sex scandal, making him the third micro-blogging celebrity to fall recently.

His predecessors were Qin Zhihui, who wrote under the pseudonym Qinhuohuo, and Yang Xiuyu, aka Lierchaisi. They were arrested by Beijing police on charges of fabricating rumors and posting them online for financial gain. No trial date has yet been announced.