The Chinese military, especially the navy, made great strides last year in improving its combat capabilities, enabling it to better defend the nation against threats to its sovereignty, according to analysts. 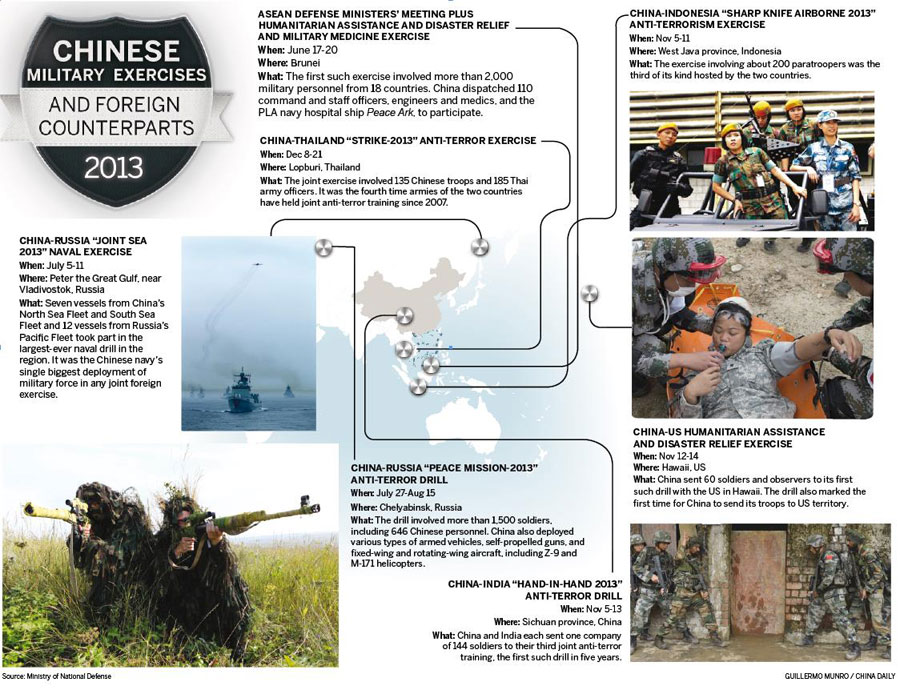 It may take time for traditional powers in the Asia-Pacific to become accustomed to a stronger Chinese military, say analysts, but a stronger military would not increase the odds of regional conflict, given the country's priority of addressing domestic concerns.

"China should have a military that can match its power status," said Ma Gang, a professor at the People's Liberation Army National Defense University. "It is the only big country that has not achieved reunification and faces serious challenges to its sovereignty and several territorial disputes."

In its New Year message on Jan 1, the PLA Daily addressed China's new position at the center of world events and the goal of national renewal.

"We have never been so close to the center of the world stage ... and have so much capability and confidence to achieve this goal (the renewal of the Chinese nation). But we have to realize that the road ahead can hardly be smooth," the newspaper said.

Less than a month after being named the head of the Communist Party of China Central Military Commission, President Xi Jinping asked PLA officers to adopt realistic combat criteria in military training.

"It is the top priority for the military to be able to fight and win battles," he said during an inspection to the Guangzhou military theater of operations in December 2012.

Under Xi's guideline, all forces of the PLA had "obviously" intensified training and exchanges with foreign forces since the beginning of 2013, said Li Jie, a professor at the Naval Military Studies Research Institute.

According to the Ministry of National Defense, between January and the end of November, the PLA completed 40 major exercises as well as 17 joint exercises and training events with foreign militaries.

The Chinese military has expanded its sphere of activity, aiming to extend its naval and air forces farther from the coast and into international waters, said Li.

The trend has been underscored by the boosted status of the Chinese navy, which started developing much later than the country's massive ground force.

The modernization of the navy started in the 1990s and saw a flurry of breakthroughs in 2013, including the creation of China's first carrier-borne aviation force and the first exercises in the South China Sea for its sole aircraft carrier, the Liaoning.

There were also increasingly complex thrusts into the Pacific that extended beyond the "first island chain blockade" — the arc of islands enclosing China's coastal waters and separating them from the Pacific.

However, Chinese experts have refuted such rhetoric, saying military moves by China are only aimed at creating improved self-defense by providing capabilities to match the other parties in the region.

"The Air Defense Identification Zone, for instance, is a common practice among major powers. China has followed the practice and made its stance clear to the world, so the criticism of some countries is discriminatory," said Li.