The ancient city takes a new route along the Silk Road 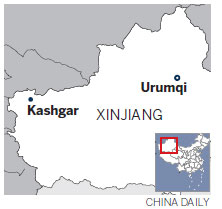 The reconstruction of Kashgar is not only designed to improve local living conditions, but also to attract a greater number of visitors. The city officially opened as a "scenic spot" in July, and now receives about 1,000 visitors every day. "It's a good start," said Adila Alet, an official at the Kashgar Tourism Bureau.

The growing number of tourists is also bringing more business to Arep's shop, which began to lose trade after modern supermarkets began offering cheaper alternatives to his handmade goods.

"Now my works are welcomed by tourists, especially those from overseas," he said. The shop's monthly revenue is now between 3,000 and 10,000 yuan, a vast improvement from the average 1,000 yuan Arep made in the old days.

Arep said that when he walks in the city, he always feels as though he's traveling through time. "Modernity won't change Kashgar. As long as we are here, the old city will remain," he said.