More and more, culture is becoming an important element in Chinese people's lives. Little wonder that one of the targets of the newly released 13th Five-Year Plan (2016-2020) is to build China's culture industry into a pillar of the national economy.

Achieving that goal might require extraordinary effort and accomplishments.

Cheng Li, director of the John L. Thornton China Center at the Brookings Institution, said that China is developing very well with its culture industry, but needs more tailored content for future growth.

"China has been quite successful with its culture program development as an industry, especially in recent years, and has shown certain creativity in terms of its design," he said. "Some of the TV programs are getting surprisingly popular, such as The Voice of China and If You Are the One."

"But we need to notice some of the potential market of the culture industry," he said. "For example, the market for senior citizens, as well as for migrant workers and people living in rural areas." 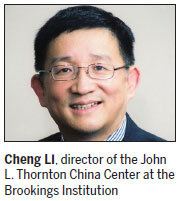 "Many of the successful examples of the culture industry are designed and targeted to young audiences. There is still a market vacancy for people over the age of 60," Li said. "Also, because old people do not stay that close with the Internet, new forms of cultural programs provided for them need to be designed."

Li pointed out that while China has achieved significant success in the past five years in the development of its culture industry, it needs to create more content tailored to reach some of the groups that have not been reached very well, such as people living in rural China.

Li also mentioned that China needs to make great efforts to improve the way that its cultural content is introduced to overseas markets.

"People around the world understand how important China is at this moment," he said. "But there is still a very large potential market for helping the world understand China. We need to introduce China to the outside world in a way that the Western society is willing to accept."