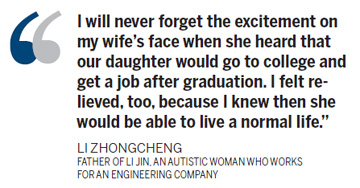 Parents of autistic children are fearful of their future prospects. Hu Yongqi in Beijing reports.

Yao Yiyi was 4 years old when doctors diagnosed him as autistic. Although heartbroken, his family hoped the news would at least start the healing process.

After five years at a Beijing special school, his parents are still waiting to witness any real progress.

"I don't know what to do," said his mother, a soldier with the People's Liberation Army who asked to be identified only as Liu. "My son seems to be no different at all."

Yao, now 9, spends most days in his "own little world", playing with his favorite teddy bear and sucking on his fingers. He rarely speaks or even interacts with others.

Liu and her husband said they are beginning to fear their son will never be able to live independently.

For parents of autistic children in China, such anxiety is typical, say mental health experts, especially as the country is yet to adopt an inclusive education model that provides suitable training and employment opportunities for youngsters with the disorder.

According to the China Disabled Persons' Federation, more than 90 percent of people with autism face difficulties in going to public schools or getting jobs.

China's first case of autism, a disorder characterized by impaired social interaction and communication, as well as restricted and repetitive behavior, was reported in 1983.

Since then, the autistic population has swelled to about 4 million nationwide. Although there is no official data on the number of child sufferers, a 2004 study by the Beijing Rehabilitation Association for Autistic Children suggested it could be in the region of 450,000.

Yao's parents spend 2,000 yuan ($300) a month for his tuition at Anhua Intelligence Training School, the only State-funded vocational center for children with learning difficulties in the capital's Chaoyang district. They also pay 1,300 yuan a month to rent an apartment near the school.

Money is tight, especially as Liu is on long-term leave from her army unit in Baicheng, Heilongjiang province, and her husband is studying for a PhD at Tsinghua University.

"Financial difficulties can be conquered. We're more worried about what is going to happen to our son after our deaths," explained Liu, 34. "Sometimes we hope he will never grow up or that he will die before us."

Autism is detectable very early in a child's development, yet Liu said doctors in Baicheng took more than three years to confirm Yao's diagnosis, causing serious delays to his treatment.

"Children should start receiving (special) training before the age of 3," said Tian Huiping, director of Beijing Stars and Rain, the country's first autism institute set up in 1993. Referring to Yao's case, she added: "If doctors had confirmed he was autistic just one year earlier, he would be speaking a lot more now."

In rural areas, even mental health professionals do not recognize the symptoms of autism, let alone the general public.

Jia Meixiang, a psychologist and vice-president of the Beijing Rehabilitation Association for Autistic Children, has specialized in autism since the late 1980s and diagnoses roughly 2,000 patients at her clinic in Haidian district every year.

She is lobbying central authorities to shift toward "a national mental healthcare system that provides quality, personalized training" for children and adults with the disorder. Jia is also among the experts calling for the government to establish a new department that keeps a closer eye on special schools. Officials need to "judge who is qualified to run these training schools", she said adding: "Supervision should be strengthened to regulate the industry."

Figures from the China Disabled Persons' Federation show there are about 500 licensed special schools for children with learning difficulties nationwide, most of which are private.

Experts who extol the potential benefits of personalized training for autistic children could easily use the case of Li Jin to prove their point.

Despite being diagnosed with the disorder at 2, after seven years of treatment by Japanese doctors she was able to receive a public primary and secondary education in Beijing before being accepted by a private college.

"I will never forget the excitement on my wife's face when she heard that our daughter would go to college and get a job after graduation," said her father, Li Zhongcheng, 49. "I felt relieved, too, because I knew then she would be able to live a normal life."

He added that his family's "curse" became a "blessing" once his daughter broke down her communication barriers and learned to harness her natural talent with numbers. Now 24, Li Jin is putting her mathematics skills to use as a researcher with a private engineering institute based in Zhongguancun, the capital's famous technology hub.

Li Jin's case is far from common, however. For the many autistic children who are unable to attend public schools, their job prospects remain slim.

Experts say sufferers are often extremely intelligent, with about 10 percent displaying "unusual abilities", such as a great capacity to memorize numbers, words or facts. Tian at Stars and Rain argues that at least 50 percent of all autistic children have the potential to meet the standards of public education and join the nation's workforce.

"Fundamentally, autistic people need to be included into the social security system and allowed to study at public schools," she said.

They "are more patient at work and will not try to escape responsibility", she said when asked what her graduates would offer bosses. "They're also more motivated. They won't get bored with repetitive processes and will stick with the work schedules."

Another employment option for people with autism could be welfare factories, similar to ones operated in Japan.

In November 2009, 14 delegates from the Beijing Rehabilitation Association for Autistic Children visited Beach Town, a factory in Tokyo that employs 100 autistic workers aged 18 to 50. They make wheat, rice and bread goods, as well as plastic toys.

The plant, which is on private land and partially run by volunteers, receives an annual subsidy of 1.5 billion yen ($18 million) from the city government, while each worker receives 80,000 yen.

"Autistic children with high intelligence can be accepted by public schools, while others can be (vocationally) trained and work at welfare factories," suggested Jia, who joined the delegation to Japan. "However, China has a long way to go."

The psychologist added that, although she understands government needs time to adapt its education model for autistic children, the changes should be a priority.

Jia's association has attempted to find land to build a factory like Beach Town. Funds, however, are in short supply. So far, the only thing the group has managed to secure from the Beijing Disabled Persons' Federation is a free room at its headquarters in the capital's Xicheng district for diagnosing and educating autistic children.

Autism was categorized as a "mental illness" in 2006. According to the 11th Five-Year Plan (2006-2010) promulgated by the China Disabled Persons' Federation, 31 pilot cities, including Beijing, Shenzhen and Guangzhou, planned to construct autism rehabilitation facilities and train more special needs teachers.

"The government should pay more attention and invest more money into the welfare of autistic children," said Wen Hong, director of the federation's autism committee. "However, any constructive policies are still under discussion and will not be released soon."

Authorities are also looking to address the unbalanced distribution of medical resources between rural and urban areas, which is forcing many to flock to the 28 psychiatric hospitals in major cities.

In Beijing, for example, only autistic children with hukou (permanent residency) in the capital can receive a monthly subsidy of 500 yuan to help with expenses.

Wen added: "As autism is attracting more attention from the public and authorities, we're hoping more will be done to improve the situation."

Names of autistic sufferers have been changed on request.