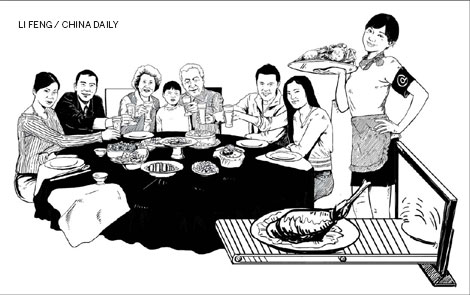 With Spring Festival just around the corner, it's time to fire up the kitchens for that all-important reunion meal. And now, this annual ritual is getting a little digital help. He Fan, a 26-year-old Beijing-based English teacher, may not know her way around the kitchen, but she's hardly worried after volunteering to prepare this year's new year eve dinner. She knows she can manage with the click of her computer mouse.

He began her preparations weeks ahead of the Spring Festival by surfing on Taobao.com, China's largest e-commerce site, and ordering partially prepared or ready-to-eat dishes from online stores and restaurants from different provinces across China, and even abroad.

"In the past, my parents and relatives would get together and cook for the more than 30 members of my family. The new year eve dinner was more like a suffering, than an enjoyment for them," she says.

With her fingers sliding across her iPad, He shows how she is planning to do things rather differently.

"I've also bought imported foods for my cousins since young people like to taste something new, such as Haagen-Dazs ice cream from the US, chocolate muffins from Czechoslovakia and deep-fried glutinous rice cake stuffed with bean paste from Taiwan."

The self-confessed shopaholic says that during Spring Festival, the stores and supermarkets are always crowded and complaints of high prices are common.

Taobao.com is offering discounts on 84 kinds of food for the Spring Festival.

Dong Xiaohua, manager of the site's food sector says, "The 30 to 70 percent discounts are substantial because the profit margins on foods are relatively low.

"Most of the food purchasers on Taobao are young Chinese and (by catering to them) we are advocating a new lifestyle.

"We are encouraging more vendors to sell their products directly online," he says. "The lower prices this results in is a big draw for customers."

For example, jade dates from Hotan, Xinjiang, which have emerged as a star festival purchase on Taobao, are selling at 100 to 120 yuan ($15-$18) per kilogram, 60 yuan cheaper than in the supermarkets.

Crabs from Yangchenghu Lake in Jiangsu province are another online favorite, with 100 to 200 stores at Taobao selling them for 30 percent less than the markets.

Wang Shuli, a crab vendor from Jiangsu province, says: "Our gift packages of crabs worth about 1,500 yuan have all been ordered weeks in advance."

Dong says daily sales of seafood packages have touched 50,000 yuan across the site with at least 8,000 Yangchenghu Lake crabs sold every day.

"The daily sales of food," he says "have doubled in the past two months. And more online shoppers are choosing specialties that are hard to find in their own provinces."

Su Dan, an online vendor in Urumqi, capital of Xinjiang Uygur autonomous region, sells lamb on Taobao and has been aggressively expanding his business to include more Xinjiang specialties.

"When customers make orders, my chefs will cook and vacuum seal them immediately," Su says. "The dishes can retain their freshness for up to a week. And you only need to cook them in the microwave for a minutes to have them ready to eat.

"There is a real scramble for fresh lamb as many consumers believe lamb from Xinjiang is very special."

Dong says that the most popular specialties on his site are those from Sichuan, Xinjiang and Zhejiang.

Taobao's sales of candies and snacks, seen as after-dinner desserts, grew by 675 percent year-on-year in 2010.

Biscuits from the US, candies from Japan and pastries from South Korea are the most popular, Dong says.