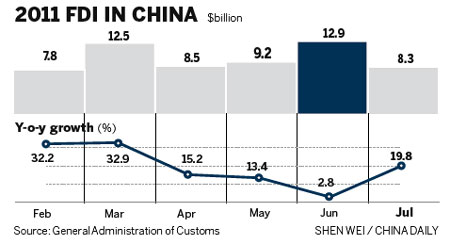 BEIJING - Investment from the United States in China saw a decline of 19.17 percent, while overall foreign direct investment (FDI) maintained double-digit growth in the first seven months of this year, the Ministry of Commerce said on Tuesday.

The continuing decline of direct investment from the US, the world's largest FDI source, against the backdrop of China's sustainable and high-speed FDI growth, has caused speculation over the further decline of the US manufacturing advantages over China, economists said.

Direct investment flows from the US to China during January to July dropped to $1.94 billion, and the number of US enterprises establishing business in China during the same period fell to 844, a 4.74 percent decline year-on-year.

But the US isn't the only one pulling back. Investment from the European Union in China, a major contributor in China, grew a mere 1.36 percent during the first seven months. In contrast, investment flows from the Asia-Pacific region, including Japan, Malaysia and Singapore saw an increase of 23.67 percent to $59.54 billion.

Yao Jian, spokesman for the ministry, said last month that the fact that the EU and US investments in China declined is relevant to the world's economic health.

He pointed out that the slowdown of US investment included emerging markets such as Brazil and India in the first half of 2011.

Peter Pak, executive director of BOCI Research Ltd, an investment research firm, contributed the decline of the US investment in China to the looming debt crisis and poor economic growth. "The figure shows that China is one of the most attractive countries among emerging markets and thus it attracts loads of money," Pak said. "I actually think the financial crisis has helped China to gain more FDI from other places. Also, expectations on renminbi appreciation is another positive factor for FDI.

"On the other hand, liquidity in both the US and Europe remains weak amid persistent debt trouble. I believe the situation will last for quite sometime, particularly for nations within the euro zone."

Song Hong, head of the department of International Trade at the Chinese Academy of Social Sciences, said US investment could drop further over the short term because of a decline in US manufacturing, a key component of US investment.

"As the US economy regains momentum, businesses that had invested in China are returning to the US market," he said.

US investment in China in 2010 grew by 13.31 percent year-on-year, compared to 31 percent for its total overseas investment, said the United Nations Conference on Trade and Development.

Lu Jinyong, director of the China Research Center for Foreign Investment at the University of International Business and Economics in Beijing, said investment flows from the US declined largely because of an increase in the cost of labor.

"The developed countries may consider moving their operation factories to neighboring countries thanks to the rising labor costs," Lu said.

But other economists believed that the drop in US investment is only a short-term problem.

Lang Qi, a researcher from a Shanghai-based securities company, said uncertainties in the global economy and the poor outlook have held back investment from developed nations, but "China's attractiveness is still there" and "there is no sign of a sharp drop coming".

Overall FDI for July surged 19.8 percent year-on-year to $8.3 billion despite the fact that the figure weakened to 2.83 percent in June, data from the ministry show.

But the fluctuation does not necessarily mean multinational companies are losing confidence and holding back on investing in the Chinese market.

The yearly World Investment Report released Tuesday by the United Nations Conference on Trade and Development said that China will remain the most attractive investment destination over the next two years.

"China will maintain its commitment to its strategy of opening the market to the world and effectively utilizing foreign investment," Yu said.

Li Xing, China Daily's assistant editor-in-chief and veteran columnist, died of a cerebral hemorrhage on Aug 7 in Washington DC, US.

Turning up the heat