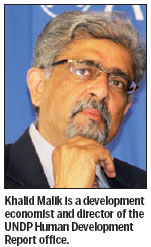 While most Americans feel overwhelmed by stories about China in the mainstream media, Khalid Malik, director of the United Nations Development Programme's Human Development Report office, has a different view.

Having been the UN Resident Coordinator in China from 2003 to 2010, Malik saw a China totally transformed in various ways.

"When you look at The New York Times and Wall Street Journal, you read about China, it may be hard to find a single positive article on China. So when you read this kind of negative reportage on China, you end up having some rather negative thoughts on China. But there is something quite different happening in China," Malik told a conference on Asia and Latin America: Perspective on Societal Transformation, held Wednesday at the Asia Society.

Malik praised China for lifting 600 million people out of poverty by saying "that is the largest uplifting ever reported in history."

"China has 97 percent of its people connected to the grid of electricity, it is quite remarkable. It has a larger highway network than the US. Just to give you a sense of the transformation happening," he told the audience comprising of people from different continents of the world.

"The best way to understand China is to keep seeing for yourself," he said. "While the image people have of China is a highly controlled environment where people were told where to live, if you look historically, Chinese people at this point probably have been the freest in history," he said.

Malik believed one reason that China is doing so well is the empowerment. People can now travel to other cities, participate in economic decisions and move around the country even though there are still some legal challenges.

A concrete example Malik cited for empowerment is the forecast that by 2020 there will be 100 million Chinese traveling overseas as tourists each year.

Even upon the restrictions and difficulties in China such as the 200 million migrant workers with questionable legal status, Malik thought this is fundamentally a pressure that only goes in one direction. "It will move things and transform things," he said.

Malik has also been impressed by the increasing voice of accountability in China, which has the world's largest number of netizens. He sees it as a fast emerging force for change, citing a severe train accident last year in which Premier Wen Jiabao promised a full investigation.

Malik said the basic reason for China's success is its long-term commitment to reform and development. He praised the country's move in making 9-year education compulsory and was deeply impressed by the ability to learn when he led a group of 100 Chinese officials on a fact-finding trip overseas on social development.

"I never see people working so hard, taking lots of notes every day. I was thinking that if I would organize such as event in Pakistan, it would be quite different. Ministers in Pakistan would want to teach others, not be prepared to learn," he said.

Cristovam Buarque, a Brazilian senator and former minister of education, saw the lack of long-term policies as a drawback for Brazil while saying "China has long-term policy. China has this amazing 5,000-year civilization, that's why they plan in the long term".

Buarque worried that the an overvalued currency, lack of infrastructure, education and innovation capacity along with high taxes, corruption and bureaucracy is going to hinder Brazil's growth in the years ahead.