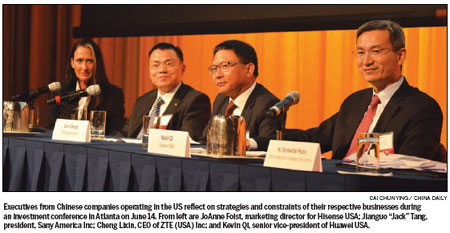 Chinese companies on the leading edge of a trend toward greater outbound investment are accelerating plans for overseas growth despite headwinds at home and the unsteady global economy.

Some of China's best-known brands plan to double sales in the United States over the next few years, executives said at a June 14 forum in Atlanta on Chinese investment.

For Sany Heavy Industry Co, a construction-equipment manufacturer from China's Hunan province, rapid expansion has become the rule rather than the exception.

The company started as a small workshop in Changsha in 1989 and has grown into a prime example of China's global expansion. Sales of equipment such as concrete-pump trucks, cranes and excavators shot to $12.7 billion in 2011 from $1.5 billion in 2007.

"We are the pump king of the world," Tang Jianguo, president of subsidiary Sany America, said at the conference, China's Global Outlook.

Although less than 10 percent of sales come from overseas, Sany in 2007 embarked on an aggressive US expansion, investing $60 million to build a plant in Peachtree City, Georgia, just 35 miles (56 kilometers) from Atlanta.

Sany spent 525 million euros (about $663.2 million) to buy German manufacturer Putzmeister Holding early this year, solidifying the Chinese company's position atop the global concrete machinery market. The acquisition will lead to a restructuring of US operations and "synergies" resulting in improved customer service, Tang said.

"We can build our capability in terms of R&D, manufacturing and customer support in this facility," he said of the Georgia plant. In October 2011, Sany announced it would invest an additional $25 million to create a research-and-development center there. It will eventually be staffed by 300 hydraulic and mechanical engineers, executives said.

Though Sany is a relative newcomer in the US, Hisense USA Corp has been biding its time for more than a decade, gradually learning about sales and distribution channels in the highly competitive American consumer-electronics sector.

Now, China's largest maker of flat-panel televisions is hoping its efforts will pay off in the potentially lucrative US market, where it currently claims less than 1 percent market share.

The company, based in Qingdao, Shandong province, plans to shift from mainly an original-equipment manufacturer to a recognized brand in its own right through the efforts of its US subsidiary, also based in the state of Georgia.

A complete rebranding, including a new logo, website and consumer-focused marketing strategy, is crucial to hitting the target of a near-doubling of TV sales to $400 million by 2013, said JoAnne Foist, marketing director for Hisense USA.

"From a marketing perspective, it's a golden opportunity. It's like a startup: How do you build a brand from essentially nothing to something? But we already have all the resources behind us," she said.

Hisense hopes to join the ranks of what Foist called "Tier Two" brands such as Panasonic and Sharp, eventually breaking

into the upper echelon of TV makers - Samsung, LG and Vizio. The company is studying the successes of those manufacturers, all of which were unknown to US consumers not very long ago, Foist said.

Hisense has made some key moves to build its brand in the US. Hisense Group Chairman Zhou Houjian in 2010 became the first Chinese executive to give a keynote speech at the Consumer Electronics Show in Las Vegas. Hisense USA is working with the Massachusetts Institute of Technology to develop localized products including TVs with 3-D capabilities and voice and gesture recognition.

Shenzhen-based telecommunications equipment giant Huawei Technologies Co, with $32.4 billion in global revenues in 2011 and operations in over 140 countries, has the opposite problem: It's well-known, but sometimes for the wrong reasons.

Though Huawei is a private company owned by employees, many Americans think it's a state-owned enterprise, a misperception that has thwarted some expansion plans in the past, said Kevin Qi, senior vicepresident for the company's US arm, based in Plano, Texas.

Sprint Nextel Corp dropped Huawei from the bidding for a major smartphone contract in 2009 after the US government voiced concerns about cyber security and the company's suspected ties to the Chinese government.

The US has more reason to welcome than to fear Huawei, Qi suggested, saying the company pays $6 billion a year to American vendors and directly employs 2,000 workers, about 70 percent of whom are hired locally. Maintaining openness to Chinese firms in the US is the key to continuing this positive impact, he said.

"We are playing the game by the rules," Qi said. "A company's strategy can materialize only if the business environment of the country will allow the company to do so."

Another Shenzhen tech powerhouse, ZTE Group, has faced similar "bumps along the way" - it, too, was excluded from the Sprint deal - but feels the "positives greatly outweigh any negatives" of working in the US, said Cheng Lixin, CEO of ZTE (USA) Inc.

The company is implementing what Cheng calls its ACW strategy (America-China- Worldwide) - buying key components in the US to meet demand for quality, tapping manufacturing-cost efficiencies in China and then selling affordable, enhanced-connectivity phones internationally.

ZTE has 10 offices in the US, including one in Atlanta, and has introduced 35 handset models with US-based partner AT&T Wireless since 2007.

These giants were early entrants, but Chinese investment in the US is still in its infancy, said Dan Rosen, a partner with New York consulting firm Rhodium Group and the keynote speaker at the Atlanta conference.

Chinese companies make up less than one-third of 1 percent of investment in the US, the world's largest recipient of foreign direct investment, according to Rhodium's China Investment Monitor.

The biggest potential hindrances to this trend continuing are "policy misgivings" among government officials and the public, both of whom are often skeptical of Chinese investors' motives, Rosen said.

States courting Chinese prospects should educate them about these possible speed bumps, and the US should stop demanding concessions for American firms in China as a prerequisite to approving Chinese investments, he said.

"We argue as ferociously as we can in DC that reciprocity should have nothing to do with the American reaction to Chinese money," Rosen said. "If other people want to put money in your economy, the answer is yes, regardless of whether they let you put money in their economy."

Xie Yunliang, China's acting consul general in Houston, said high-level visits such as Vice-President Xi Jinping's US trip in February and channels including the Strategic and Economic Dialogue are important to maintaining success in the commercial relationship between the world's two biggest economies.

Since China's accession to the World Trade Organization in 2001, US exports to China have increased 468 percent. US companies have invested $67 billion in the country during that time, and Chinese firms now have the ability to return the favor, Xie said.

"Chinese firms are getting increasingly enthusiastic about investing in the US," he said, pointing to conference speakers as examples of these aspirations. "They presented their companies well in English and know how to interact with their Western counterparts. I have confidence in them."

Chinese multinationals aren't alone in seeking US opportunities. Smaller companies including Shanghai motor manufacturer Techtop Group and Hong Kong-based lighting provider SMC LED Corp, both privately held, are dipping their toes in the market through sales before diving in with new plants.

Chinese manufacturers as well as US companies headed to China should realize that cross-border success relies on the ability to understand business culture, not just personal interactions, said Ni Jian, chief operating officer in the US for SMC LED.

Carter, a Georgia native and a former governor of the state, worked with then-Deputy Premier Deng Xiaoping, architect of the modern Chinese economy, to normalize relations with China in 1979.

On a visit to China in 2011, Carter saw firsthand the capacity of Chinese firms to invest in the US. He was impressed by a Huawei video conferencing system that enables conversation as if people were sitting across the table from each other. Halfway around the world, the former president chatted with Huawei's office in Atlanta, Carter Center president John Hardman recalled.