American author Sara Bongiorni and her family conducted a yearlong, experimental boycott of "Made in China" goods. In the 2007 book that resulted, she concluded: "After a year without China I can tell you this: You can still live without it, but it's getting trickier and costlier by the day. And a decade from now I may not be brave enough to try it again."

Bongiorni wasn't exaggerating. Today, with the world experiencing slower economic growth in China and weaker Chinese demand for imports, consumers are still buying and investors still regard the market as a land of opportunity.

Both sentiments were on display Tuesday at an event in New York to promote the China Import and Export Fair, also known as the Canton Fair. The semiannual event, held each spring and fall, will have its 112th session in October in the southern Chinese city of Guangzhou.

Myles Matthews, president of the Global Trade and Technology Center, a trade-promotion group in New York, was among the Canton Fair's buyers and exhibitors who attended Tuesday's kickoff. It was organized by the China Foreign Trade Center (part of the Ministry of Commerce), and the Chinese consulate general in New York.

"China might be affected by the economic downturn as well, but you can still find a lot of economic opportunities in China since it has enough of a domestic market that is not going to downturn like the US," said Matthews, who has attended each Canton Fair for the past five years.

"If the US doesn't find buyers outside the US, then you are in trouble," he added.

Trade with China slowed in July, with exports up only 1 percent from the same month last year, and imports rising 4.7 percent. These figures, however, don't put off China bulls like Matthews. He regards China's huge population and growing number of rich people as inherent pluses.

One of the products he'll be bringing to this October's fair is a new model of tablet computer that drew accolades at a trade show of wireless-industry association CTIA. The tablet has a chip-embedded SIM card and can be used as a mobile phone.

"One of the things we want to do is to promote and sell our products in China because the young people in China love technology," Matthews said. "Everybody gets the computers and everybody tries to invest in themselves."

The pre-fair promotional event has been held in New York for five years to encourage US companies and organizations to buy and exhibit. The Canton Fair itself draws 200,000 buyers from around the world. 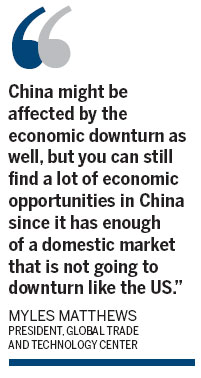 "It's a one-stop shop - you don't have to travel to all of the countries to meet these buyers," Matthews said.

Ann Li, executive director of the Center for Economic Transformation in the New York City Economic Development Corporation, said events such as the Canton Fair are "an important tool for New York City businesses who are trying to leverage the opportunities and resources unique to China".

"Clearly, New York businesses seeking to expand need to at least consider how China and Chinese partners fit into their expansion plans," she said at Tuesday's event.

New to the fair is Anastasia Cifuentes, co-founder of Grower Ideas, a New York tech start-up focused on developing mobile-device applications. She aims to bring the apps to developing countries and will head to Guangzhou because the fair seems a perfect fit for her company.

"The Chinese market is huge and certainly the ability to create a product in China is much easier in many respects than it is here," said Cifuentes, a Princeton alumna who majored in Chinese language.

Dubbed "China's No 1 Fair", the state-sponsored exhibition began in 1957. The most recent fair, in May, drew some 210,800 foreign buyers from 213 countries and regions with annual business revenue of up to $360.3 billion. The upcoming fair will run from Oct 15 through Nov 4 on Pazhou Island in southeastern Guangzhou.

"This is a convenient platform for US companies to explore the 1.3 billion-people Chinese market. We hope that through the Canton Fair, US-China trade relations could further develop in a more balanced way," said Xu Bin, deputy director general of the China Foreign Trade Center, who led a delegation to New York.

The fair also strives for innovation in bringing in new attendees. Since the 109th session, it has included a Product Design and Trade Promotion Center that is a platform for international design institutes and Chinese manufacturers. Through its shows and forums, the center has attracted more than 120 designers from 32 institutes from countries including Italy, Spain, France, the Netherlands and the US.

Mark Jaffe, president of the Greater New York Chamber of Commerce, which helped organize Tuesday's event in Manhattan, believes that effort in particular will attract some of his group's 70 members in fashion design.

"This is a great opportunity for them to purchase services and goods through the context we developed in China at the Canton Fair," Jaffe said.