When a vessel of China Ocean Shipping Group Co sailed into the Port of Seattle in April 1979 carrying goods loaded in Shanghai, a new chapter in US-Chinese maritime relations began.

Liu Lin Hai was the first Chinese-flagged ship to call on a US port since the founding of the People's Republic of China three decades earlier, as the State-owned shipping line formed in 1961 is known, officially landed in the US by registering Cosco Americas in California in 1982.

Richard Lidinsky is among shipping-industry insiders who have taken note of Cosco's development in the US over the past 30 years. Now chairman of the Federal Maritime Commission, which regulates international ocean transportation for US exporters and importers, Lidinsky was a young lawyer for Baltimore's port authority in 1984 when he traveled in a delegation to Beijing in hopes of persuading Cosco to open a shipping route to Baltimore.

Three months after that visit, a ship laden with cargo containers departed the Maryland city for China.

"We're very proud because in those days no one knew that a China trade like we developed would become the tremendous asset for both countries it is today," Lidinsky said. Back then, he recalled, Cosco was a kind of trade liaison between the US and China.

In Fortune magazine's most recent Global 500 list of companies, Cosco is ranked No 384 - up 15 places from last year - with reported revenue of $28.8 billion. The company first made the list in 2007.

Today, Cosco Americas Inc is based in Secaucus, New Jersey, and operates in 11 cities including New York, Boston, Houston and Long Beach, California. It employs about 600 people across the country, over 90 percent of whom are local hires, including union workers.

"I was amazed to see the growth," Lidinsky said. "It has built up from a very small company to a major player in trade between our two countries." Cosco, he added, "understands the rules and plays by the rules".

In 1982, two representatives of the US unit managed a single vessel per month. The shipper now operates 23 lines each week on the East and West coasts with modern container vessel capacity of 8,500 20-foot-equivalent units, said Liu Hanbo, Cosco Americas president.

Liu has a clear vision of the company's direction and emphasizes that "localization" is crucial to establishing an international brand. He describes as "cultural integration" the process by which his local team works most effectively with company managers in China.

"There are differences in the two cultures, and we must learn to respect these differences within the company," he said. 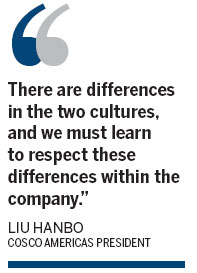 "It's almost like a family; it's very nice," said Grossi, who has been with the company for 16 years.

Richard Larrabee, director of port commerce for the Port Authority of New York and New Jersey, calls Cosco "a reliable carrier" and "a great partner" for his agency. The company, he said, contributes to the 280,000 jobs and $36 billion in revenue generated by ports in the New York City metropolitan area.

"They are one of many stakeholders in the port and have taken a real interest in the port," said Larrabee, referring to the container terminals in Elizabeth, New Jersey, from which Cosco's US arm operates.

"They put their headquarters here (in Secaucus), which means a lot to us."

Liu wants his company able to navigate the US market in peak competitive form, which is he stresses the importance of Cosco's "CKYH alliance" with fellow Asian shippers K Line (Japan's Kawasaki Kisen Kaisha Ltd), Taipei-based Yang Ming Marine Transport Corp and the Republic of Korea's Hanjin Shipping Co. The four companies share a single vessel on some voyages, which helps each to enhance service capability and coverage to the shippers.

According to Larrabee, Cosco has further contributed to the New York-New Jersey port community through marketing of the port as its trade focus shifted from Europe to Asia.

China is the third-biggest US export market, with agricultural products and computers and electronics the most popular goods. Between 2000 and 2011, total US exports to China rose 542 percent from $16 billion to $104 billion, according the US-China Business Council, a nonprofit organization of more than 250 American companies that do business in China.

China was the United States' largest supplier of imported goods last year, with a total value of $399 billion, up 9.4 percent from 2010, according to the US Trade Representative's Office.

Cosco drew greater recognition when it started direct vessel service to Boston after Danish shipping line Maersk, part of AP Moller-Maersk Group, closed its routes to that port in 2002. Cosco then made its name as a Chinese company that saved some 9,000 maritime-shipping related jobs in New England.

A collaboration between Cosco and the Massachusetts Port Authority has preserved more than 34,000 jobs over the past decade, said David Mackey, interim CEO of Massport, as the agency is known.

"There is great competition between ports for shipping lines, so Boston is lucky to have Cosco," said Lidinsky of the Federal Maritime Commission.

For Wei, these achievements are just the start of a process whereby he aims to build State-owned Cosco into a "century enterprise" that will remain global in scope yet nimble enough to adapt to changing needs in maritime shipping.

US operations are fundamental to this goal, Liu explained, because they strengthen the brand within the world's biggest economy and are the base for continued expansion throughout North and South America.

"We will also open more new services [such as container, bulk and tanker shipping] for US clients to destinations other than China - to the rest of Asia and Europe for example," the company president said.