When the Eli and Edythe Broad Art Museum at Michigan State University opens this November, it will be the first American art institution with a China-based curator.

Although other museums have hired Chinese curators and directors, Wang Chunchen's continued residence in Beijing will set his tenure apart.

Wang, who will serve as the museum's adjunct curator, is deputy head of curatorial research at Beijing's Museum of the Central Academy of Fine Arts.

He has previously organized international exhibitions including Infinity at Galerie Iris Schuhmacher in Berlin, 2009; and Between Reality and Virtuality at New York's ArtGate Gallery earlier this year.

Chinese art scholars have been employed by other US institutions, including the University of Chicago's Smart Museum of Art, for which Hung Wu is a consulting curator. Hou Hanru was previously director of exhibitions at the San Francisco Art Institute.

However, both were based in the US. Wang will be the first to continue living in Beijing while holding a position at an American art institution.

The museum will be housed in a building designed by Zaha Hadid, who designed the Guangzhou Opera House, and will focus on contemporary art, Rush said. The opening exhibition will feature work from artists in 20 countries, including New York-based artist Andrew Kuo, who was the museum's first acquisition.

"One of our focuses at the museum is to explore contemporary art from around the world, and it's important that it be from the perspective of someone from inside of those cultures," Rush said. "I am a Western person, and my co-curator is also Western. We can't help that, but what we can do is go to other countries and hire people who understand the work from the inside.

"The Western perspective is a dying perspective, in my opinion. Yes, we still have political and economic strength, but the world has evolved so much that the Western idea of history and evolution is very one-sided. We're interested in presenting a broad view of contemporary culture."

About 10 percent of the university's freshman class this year will be from China, Rush said.

"One of my big focuses is to make this museum a key part of the global reach that the university already has. We want to be the cultural link, to provide necessary communication."

For Wang, it's important that unknown Chinese artists receive exposure in the US. 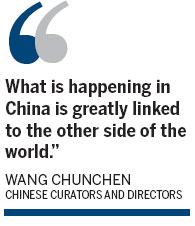 "What is happening in China is greatly linked to the other side of the world," he said. "I have felt the journey that China is on, and it is clear that China is deeply affected and influenced by ideas from the West.

But today, Chinese contemporary artists are aware that they need to create something that belongs to themselves. They don't want to continue to follow suit in the tradition of previous artists or Western models. Chinese artists might borrow Western mediums, but I believe that the basic thinking is unique to China itself."

He expects that the trajectory of the Chinese art scene will continue forward.

"China can never retreat to its old model. The only way is to be more tolerant, to be more unique and individual. We cannot always look to our culture of 2,000 years ago; but we also must cherish and revitalize our traditions. The Western model is not the absolute truth, but we cannot refuse good knowledge from the West either."

Being based in China will be incredibly useful, he said. In his position at the Museum of the Central Academy of Fine Arts, he is in constant contact with artists and visiting scholars.

"I am so curious and committed to contemporary art in China. I am absolutely certain that if I stay in China I can find many emerging artists and bring them to American audiences. I want Americans to see an alternate picture of Chinese culture."

Wang's first curatorial effort will be titled ReChina, a theme that can be interpreted to connote "reform, renewal, reconsideration," he said.

He is confident that American audiences are receptive to learning more about Chinese art.

"From my communication with American visitors in my museum, they say 'We are so curious about China,'" he said. "This is global contact, and it's a communication between the countries."