Mulberry Child, the acclaimed memoir by Jian Ping of China's "cultural revolution" (1966-76), was published in 2008, but it would take eight months for the daughter who inspired the book to read it.

For Lisa Xia, who moved to the United States at age 4, her mother's story was one more symbol of the distance between them, an account of a history that felt worlds away. So when a documentary-film maker interviewed the two women in hope of adapting the book for the screen, it was clear that their relationship should play a pivotal role in the story.

The resulting movie is a document not only of Jian's heartbreaking family history, but a testament to a mother-daughter bond that has grown stronger as a result of the project.

"When I first met Jian Ping and Lisa, there was an emotional disconnect between them," said Susan Cooper, who directed and produced the Mulberry Child film. "I thought to myself, 'Wouldn't it be interesting if I could somehow trace this disconnect back to Jian's traumatic childhood, and show that the 'cultural revolution' had a legacy that was handed down over generations and between cultures?'"

When we meet mother and daughter, 52-year-old Jian is urging Xia to spend more time with her. They live about 2 miles from each other in suburban Chicago but see each other only once a month. Xia is resistant. The more her mother pushes, the less receptive she is.

"Our relationship was not so dissimilar to many mother-daughter relationships," Xia, now 27 and a public-relations executive, told China Daily. "Every mother wants to do everything in their power to get close to their kids, and you're always thinking, 'Stop trying so hard'. My mom was adamant about getting closer, but I rolled my eyes and just said, 'Yeah, yeah, yeah.'"

But as she begins to read her mother's book (depicted in the film through re-enactments), their relationship evolves. Later, the pair travels to China for an emotional reunion with extended family.

"Watching the early parts of the film is mortifying for us, because our relationship was still evolving," Jian said in an interview. "It was difficult, but eventually it really helped bring us together. I'm so glad that the film is focused on the mother-daughter relationship, with the background of my story and how I became who I am today."

Mulberry Child traces Jian's traumatic back-story. Her father was falsely accused of treason, and her mother was imprisoned; the family was separated for long periods.

Interviewing Jian and Xia was a challenge, Cooper said. Jian, who came to the US in 1986 and later served as national director for Tsingtao beer, had learned to suppress her feelings as a result of her upbringing, while Xia dodged sensitive topics with glib one-liners, Cooper said.

Watching her own behavior at the beginning of the film was embarrassing for Xia.

"It's extremely difficult to put your life out there for the public and media to judge you," she said. "I came on as an unwilling participant. Watching it now, I look like such a jerk. But seeing how the film has resonated so well with the public, it's really changed my opinion and I'm an active participator and supporter of the film now.

"Everyone has grandparents who say stuff like, 'When I was a kid, I had to walk uphill both ways in the snow without shoes on to get to school,' and we all roll our eyes. My mom would talk about her hardships and how lucky I was, and I'd think, 'I'm just a suburban girl.'"

Once screenings of Mulberry Child were underway, audience reactions touched her, Xia said. One woman whose parents had survived the Holocaust told Xia she related to the story and that her parents, too, thought their daughter took things for granted and judged her by what felt like impossible standards, in the same way Jian had done.

"In the end, it was really rewarding to have been seen as such a jerk, because it was real and people related to our story," Xia said.

The story has resonated with both Western and Asian audiences. 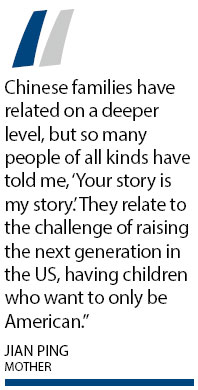 "Chinese families have related on a deeper level, but so many people of all kinds have told me, 'Your story is my story,'" Jian said. "They relate to the challenge of raising the next generation in the US, having children who want to only be American. Some people connect with my position; others connect with Lisa's.

"I have been so encouraged, and the filming process has helped me to see Lisa more clearly," the mother added. "I know it has also helped her understand my perspective. Beside the cultural gap, there is also a generational and social gap that families deal with. My hope is that people can reflect on their own relationships in watching the film."

Cooper recalled European viewers who said they planned to call their grandparents in Italy and Ukraine after seeing Mulberry Child.

"We are a nation of immigrants in the US, and all too often the older generation has gone through great adversity to come here," the filmmaker said. "The new generation has grown up with all these comforts and they don't appreciate the hardship that their grandparents and parents went through.

"I think if the movie has any small success, it's that it has opened up a conversation."

Jian believes Western audiences are receptive to learning about China because of its economic ascendance but that many Americans have a superficial knowledge of Chinese culture. She often makes speaking appearances for Chinese social organizations, she said.

"People ask me, 'Why do you support China after the 'cultural revolution'? I feel that a lot of ideas about China are based on fear and ignorance," she said. "I want to bridge some of those differences. I try to tell people to keep history in perspective, to focus on the progress."

Xia feels more connected to her heritage, she said.

"In a really tangible way, this process solidified my ties and connection to China as both the country it was and has grown to be," she said. "They say that you breathe in your first culture, and you swim in your second. In China, I'm always swimming, but every time I go there I know it won't be the last."

In addition to recent screenings in New York and Chicago, Mulberry Child will be shown at Laemmle's Music Hall 3, a cinema in Beverly Hills, California, starting Oct 5.