At the same time, the mayor of Toledo, Ohio, was welcoming Chinese guests at a conference to drum up investment that could help his city on Lake Erie pivot from Rust Belt relic to economic renewal.

Mayor Michael Bell played host to 160 businesspeople, mostly from China, at the 5 Lakes Global Economic Forum from Sept 24 to 26 as a way to present Toledo as a potential investment site. Sun Wansong, head of the investment-promotion office in the Ministry of Commerce, led the official Chinese delegation.

On the forum's final day, the businesspeople and government officials went on guided tours of Toledo's port - the biggest on the Great Lakes - and manufacturing plants including one for auto parts. Ohio is second only to Michigan among US states with the most jobs tied to the automobile industry.

The northwestern Ohio city has suffered through three decades of economic hardship following its postwar industrial heyday. The loss of good-paying factory jobs pushed many locals to seek work in other parts of the country, slowly eroding Toledo's population to slightly less than 300,000.

As in the region's other once-thriving manufacturing bases (Pittsburgh, Buffalo and, on the opposite end of Lake Erie, Cleveland), officials in Toledo want to market their city's post-industrial economic potential. Toledo's promotional focus is on businesses tied to health care and pharmaceuticals, high-tech manufacturing and, most of all, transportation and distribution: The greater metropolitan area is within 500 miles (800 kilometers) of some 93 million people in the United States and Canada, about a quarter of the two countries' combined population.

Politically, Ohio could hardly be more important. It is among the few must-win swing states in every US presidential election, and this year's Obama-Romney race is no exception. No Republican has ever won the presidency without getting a majority of Ohio's vote, and no Democrat has succeeded without Ohio since John F Kennedy in 1960.

For the second time in recent weeks, Obama told crowds at campaign stops in Ohio about a new trade case his administration had brought against China. The White House asked the World Trade Organization to sanction Beijing for subsidizing exports of cars and auto parts.

Obama also said the US government has brought more trade actions against China during his term than did the administration of Republican predecessor George W Bush in two terms.

For his part, Romney in September slammed Obama's trade stance with China, saying the president has failed to label Beijing a currency manipulator.

A month earlier, Romney's pick to be vice-president, Paul Ryan, visited Ohio and accused China of stealing US companies' intellectual property, restricting access to its markets and manipulating the yuan, and he said Obama had been a "doormat" amid Chinese "cheating" in trade.

"Obviously, somebody is disconnected," Bell said on the sidelines of last week's economic forum.

The mayor said he sees the advantages of relationships Toledo is building with China. 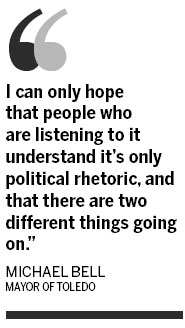 "I can only hope that people who are listening to it understand it's only political rhetoric, and that there are two different things going on," Bell said.

"I've got to figure out how to stabilize our city. We are committed to changing our city, and this is what it's all about."

The forum was organized by the Regional Growth Partnership, a privately run coalition of businesses that, with the University of Toledo, promotes economic development in northwestern Ohio.

The forum took its name from 5 Lakes Global Group, a consulting firm that provides translation and support services to foreign enterprises doing business in the region. It helped market the event to entrepreneurs and companies in the Chinese mainland.

The founder and president of 5 Lakes Global Group is Simon Guo, a native of China who immigrated to the US over 20 years ago and now lives in Toledo.

At the forum, Bell said he hoped participants would establish solid friendships with local businesspeople during their visit.

"As a mayor, I have been to China three times. I'm going for the fourth time in November. How can I call myself your friend if I don't visit your country?"

For many of the Chinese executives, this was their first time visiting Toledo.

"Most of them haven't heard of Toledo," Guo said. "They only know New York, Los Angeles and San Francisco. But when we started to introduce Toledo and tell them what this city is all about, they became interested."

According to Dean Monske, Regional Growth Partnership president, the number of Chinese attending the forum would have been 250 if some hadn't run into difficulty getting a US travel visa.

Toledo has already drawn some Chinese investment. Shenzhen-based developer Dashing Pacific Group in 2011 paid $2.15 million in cash for the Docks, a downtown restaurant-and-retail complex along the Maumee River.

Dashing Pacific later spent $3.8 million to buy 69 acres of waterfront property in the city's Marina District, and it plans to invest $200 million on a new project combing housing, offices, shops and entertainment.

In September 2011, some Chinese investors who declined to be identified by name spent $3 million to buy Toledo's Park Inn hotel, which was the site of the 5 Lakes forum.

According to Monske, three Chinese manufacturers, one in the steel industry, expressed interest in doing business in Toledo, and he hoped some deals would emerge from the three-day forum.

It was announced during the event that Li Zhenguo, chairman of Mudanjiang Youbo Pharmaceutical Co, intended to have his company collaborate with the University of Toledo's medical school to build a research and development facility.

These days, the regional partnership works closely with the mayor and his aides to market Toledo to China. The development group has an office in Shenzhen, with 15 employees who travel throughout China talking up investment opportunities in northwestern Ohio.

Bell said his only regret is that the idea of Chinese investment didn't hit him sooner.

One afternoon shortly after the mayor took office in January 2010, a businessman visiting from China - a friend of Simon Guo's - approached Bell as he was walking out of a restaurant at the Docks and said: "You have a very beautiful city here. Have you thought of marketing it in China?"

"I realized then that our city at the time had a $40 million deficit. I thought to myself, 'Why not go and find out what this is about?'" Bell recalled.

He was soon on a plane to China with Monske and others from the regional partnership and hasn't looked back. Some Toledo businesspeople have accompanied the mayor's group on its three trips to China.

"When I went to Shenzhen, they told me their population is now 15 million. They had 15,000 people 20 years ago - now that's what I call economic growth," Bell said. "Why not go to a place where economic growth has actually occurred, to figure out what they were doing and if it could be copied here in the US?"

When the mayor's term began over two years ago, the unemployment rate in Toledo was near 13 percent. According to the US Labor Department, the city's joblessness as of July was 7.4 percent, below the national average of 8.1 percent.

Bell said the foreign investment of recent years has helped his city's finances. China now accounts for 6 percent of non-US investment in Ohio; as much as 65 percent comes from Europe.

But Chinese investors, particularly in real estate development, are becoming more common locally. Chinese are second only to Canadians in the volume of US real estate investment, according to the National Association of Realtors.

"The idea of this seminar is to attract Chinese investment," the mayor said. "We are still at the incipient stage. Less than two years ago, people asked me, 'Where is Toledo?' If you can do that much in less than two years, what could you if you had a real plan to market this city?"

He is undeterred by those in Toledo who are skeptical about investment from overseas.

"What they need to do is to pursue and learn about global economics. People who did most of the complaining are the minority. The majority who would agree with you won't say anything."