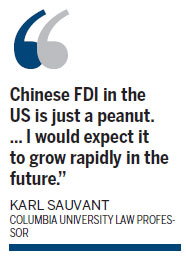 Foreign direct investment in the United States from China hit a record high through the first nine months of 2012 despite election-year rhetoric against the country and a congressional report casting national-security suspicions on two Chinese tech companies.

During this year's first three quarters, Chinese enterprises poured $6.3 billion in FDI in the US, according to a report released Thursday by New York-based Rhodium Group, which tracks Chinese investments. The deal pipeline is strong, with major acquisitions pending in aviation, auto parts and energy, said Thilo Hanemann, the firm's research director.

"While energy and advanced manufacturing continue to land the most investment dollars, 2012 deal flow suggests that Chinese investors are increasingly interested in US service firms, including entertainment, hospitality, finance and information technology," he said.

During the third quarter ended Sept 30, Chinese enterprises spent $2.7 billion on 10 direct investments in the US. While the number of projects is smaller than in previous quarters, the average size of transactions this year reached an unprecedented level.

The $2.6 billion acquisition of US cinema operator AMC Entertainment Holdings by Dalian Wanda Group, completed in early September, was the biggest overseas deal ever by a privately held Chinese company.

Report: No evidence of spying by Huawei

While a Rhodium report last month said 600 Chinese investment transactions made between 2000 and 2012 had created 27,000 jobs by the end of the second quarter, the new study said another 1,000 jobs were created during the recently ended three-month period. This doesn't include US companies with minority Chinese investment or indirect jobs, such as those in construction for Chinese facilities and those at suppliers. It also excludes hourly workers, which in the case of AMC totaled 18,000.

Two recent high-profile developments have heightened interest in China's investment in the US.

The first was US President Barack Obama's executive order requiring Chinese-controlled Ralls Corp to abandon a wind farm project near a military base in Oregon and divest all of its related assets. It was only the second time a US president formally blocked a foreign acquisition; the first was in 1990.

Hanemann said there is much misunderstanding about the motives behind Obama's decision and its implications for Chinese US FDI.

The Ralls case, he said, doesn't reflect a tightening of US policy. The controversy could have been avoided if the investor had followed precedent and gone before the Committee on Foreign Investments in the United States before pushing through with the deal, according to Hanemann.

In Beijing on Thursday, Ralls CEO Wu Jialiang vowed to "fight to the very end" in the company's attempt to sue the Obama administration for blocking the deal.

The second major headline-grabbing event was a report earlier this month by the House of Representatives' Intelligence Committee of its investigation into Huawei Technologies Co and ZTE Corp. The panel's Republican chairman and ranking Democratic member expressed concerns of a threat to national security from the two Chinese telecommunications-gear providers, which operate in the US and many other countries.

Hanemann said the report's impact on Chinese FDI in the US remains to be seen.

"This is not a report by the US government, not by the House, but two members of the House committee. It does not reflect US policy," he said. "It really has not surprised me with new findings. Huawei had difficulty getting large infrastructure contracts before."

What is also unclear, the Rhodium executive said, is whether other countries will follow suit with similar allegations. Some lawmakers in Canada and Britain have also expressed security concerns with Huawei and ZTE.

"Both the House Intelligence Committee report and the Ralls case don't send a positive signal to Chinese firms that they are welcome in the US," said Karl Sauvant, a Columbia University law professor who is an expert on Chinese FDI in the US.

Sauvant believes the US is still open to Chinese investment.

Both the US and China should make more of an effort to tell Americans about the benefits of Chinese FDI, Sauvant said, pointing out that many states have welcomed Chinese investors. Viking Weiqiong Tao of Dallas law firm Kane Russell Coleman & Logan said the recent controversies may have a negative effect on those Chinese who don't understand the US.

She also stressed the positive welcome local governments in the US have given to Chinese FDI. "This will not change," said Tao, adding that her firm has received an increasing number of inquiries from Chinese investors who want to come to the US.

Sauvant expects the upward trend to continue. "So far, Chinese FDI in the US is just a peanut. It's very little. I would expect it to grow rapidly in the future," he said.