China, home to the world's second-biggest economy, is experiencing a period of prosperity. However, when it comes to "soft power" - exerting influence through culture - the country remains a work in progress. 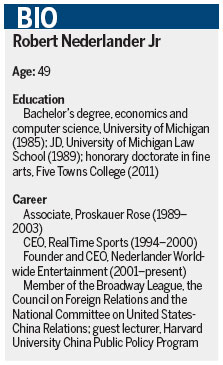 In trying to meet this challenge, particularly in the performing arts, China has turned to Broadway impresario Robert Nederlander Jr.

Broadway hits like The Lion King and Wicked have become known around the world. This is due in no small part to Nederlander and his family, who have worked behind the scenes to raise Broadway's international profile while bringing live entertainment from China to the legendary New York theater district and other parts of the US.

One hundred years ago, David Nederlander bought the Old Detroit Opera House, then the top performing-arts venue in Michigan's biggest city. In 1964, David's son James moved to New York to expand the family's theater business. Since then, the family-run Nederlander Organization has become a key player on Broadway, managing about half of the musical theaters in the area including its eponymous showplace on West 41st Street.

Robert Nederlander, a third-generation family member who founded Nederlander Worldwide Entertainment to develop the business abroad, is involved in a range of live-entertainment projects, including in China.

"My first visit to China was in 2001, when I saw enormous changes in the country," he told China Daily. "When you consider its culture industry is 15 years old or less, there should be a craving for entertainment."

Under revised rules on the administration of commercial performing arts in China, Nederlander in 2005 opened the first foreign entity in the country's performing-arts industry. In the years since then, the US company has established a network of theaters in hopes of staging plays and musicals in Beijing, Shanghai, Suzhou, Xi'an, Tianjin and other major Chinese cities.

The Nederlander family's interest in China dates back to the heady days of "ping-pong diplomacy" in the early 1970s, when an exchange of table-tennis teams helped thaw a two-decade chill in relations between Beijing and Washington.

"My father played a small role back then, as he led the first academic delegation to China in the mid-'70s since the 'cultural revolution'," Robert Nederlander said, referring to the 1966-76 period in Chinese history and his father's membership on the University of Michigan board of regents. The school hosted China's national table tennis team during its historic US visit in 1972. 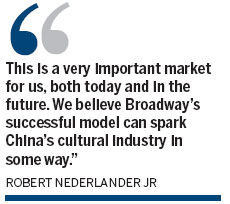 "It made headlines in newspapers at the time, and my interest really began with that effort."

In 2007, Nederlander Entertainment staged the Tony Award-winning musical 42nd Street in nine Chinese cities, the most extensive Chinese tour of a Broadway show to that point.

"Soul of Shaolin is the first production to open on Broadway from China and the first to use kung fu as a way to tell a powerful story," Bloomberg said at the January 2009 opening ceremony for the show. "I commend Nederlander Worldwide Entertainment for their dedication to creating an open channel between American and Chinese theater."

The mayor concluded his remarks by expressing hope that Soul of Shaolin would prove to be the first of many Chinese-US productions to be staged in New York.

"We were very proud of being part of the presentation of the first Chinese show on Broadway," Nederlander recalled. Soul of Shaolin, which was nominated for both a Tony Award and a Drama Desk Award, was a commercial success as well as a great experience for everyone involved."

With Broadway dominated by new American productions or revivals of past hits, the rare import offered audiences "a chance to see great Chinese live entertainment and China's great culture", the border-crossing producer said.

"It's very frequent for a show outside the US, like in London, to come to Broadway, but not so for many shows from China. Soul of Shaolin was the first step, which was a very successful one. The compelling story, together with the great action of Chinese kung fu, helps American audiences cross the cultural boundary."

Besides paving the way for Chinese live entertainment on Broadway and taking New York productions on tour in China, Nederlander's commitment to cultural exchange has an academic side.

Since 2010, China's Ministry of Culture has joined Nederlander Worldwide Entertainment in conducting certificate-granting "master classes" for arts professionals. The weeklong educational program consists of classroom seminars and theater tours for about 20 Chinese officials, theatrical administrators and academics. They are immersed in all aspects of Broadway-style musical-theater production - casting, budgeting, promotion, ticketing and marketing.

"We've invited top Broadway professionals, including the greatest producers, and writers such as Chinese-American Tony Award winner David Henry Hwang, to share their knowledge with our Chinese friends," Robert Nederlander said. "Everybody is learning, trying to figure out the differences as well as similarities we have for future collaboration."

Broadway shows have sold over $1 billion in tickets in each of the past three seasons, according to the Broadway League, a trade group that co-presents, with the American Theatre Wing, the annual Tony Awards.

But Broadway's economic impact is felt beyond the box office. In 2010 and 2011 combined, New York City had more than $11 billion flow into its economy from direct spending by Broadway producers, theater owners and tourists, along with sales taxes and other revenue from the constellation of businesses that support the industry. This direct and indirect spending helped keep 86,000 people employed.

"Broadway is a mature business model that we should learn from to inspire live entertainment in China," said Xiuqin Wang, deputy director of the cultural-exchanges division at the China Performing Arts Agency, which is overseen by the Ministry of Culture.

"Broadway theaters have been in existence for over 100 years. They present the highest-level, most successful commercial live shows in the world, and this program should be one of the best approaches for us to learn from our American counterparts, and to shorten the distance between us in performing arts," said Wang, who was among the professionals in this year's Nederlander "master classes".

In the long run, growth in China's performing-arts industry can contribute significantly to soft power, but the process is slow.

"Although considerable government resources and local private-sector resources have gone into the cultural industry, China has a long way to go before its cultural products reach a point at which they can affect soft power," Zheng Wen, director of the ministry's Bureau for External Cultural Relations, told China Daily.

The culture sector has been expanding in line with the Chinese economy, contributing 3.9 trillion yuan ($627 billion), or more than 3 percent, to annual gross domestic product.

At the recent 18th National Congress of the Communist Party of China, a total of 6,900 cultural organizations once affiliated with the government were converted to enterprises, a sign of the central government's continuing effort to free up the industry. Experts have said Chinese consumers should be enjoying 4 trillion yuan's worth of cultural products a year based on per capita GDP from 2011. But annual cultural consumption is now only 1 trillion yuan, a quarter of the target.

While China has the world's No 2 economy, the United States is likely to remain the most powerful country in the first half of the 21st century, including in the exertion of soft power, Harvard University professor Joseph Nye, who pioneered the concept, told China Daily in a 2011 interview.

"China still has a long way to go to catch up in military, economic and soft power. It is important to increase China's soft power as well as its hard power," Nye said.

Regarding China as an emerging market for cultural consumption, especially in the performing arts, Nederlander said the country is equipped with the "hardware" for productions: theaters and other performance spaces.

"For China, this is still a new area," he said. "The challenges in any new industry come from the growing pains. The development of new theaters is perhaps the easier aspect of growth in the cultural industry in China. But you can't have successful theaters unless you have successful management."

That management, along with training for creative talent such as writers, directors and actors, presents the real challenge: the "software," which Nederlander said "is lagging behind the hardware".

The 2013 master classes will coincide with preparations by Nederlander Worldwide for a production in China that fuses CGI and other high-tech effects with a classic story.

"It will be a Chinese version of Peter Pan, which will be presented in a tent environment, providing the Chinese audience an immersive experience without a traditional set. The earliest release will be next summer."

Since its 1912 purchase of the Detroit opera house, the family business has become "one of the greatest dynasties of American theater", according to a profile of the Nederlander Organization on the American Th eatre Wing's website.

As the parent company heads into its second century, Nederlander Worldwide intends to keep an eye on Chinese entertainment in pursuit of ideas for cultural and commercial exchanges.

"The Nederlander family is thrilled to work with our many friends in China and participate in the fast-emerging cultural industry," Robert Nederlander said. "This is a very important market for us, both today and in the future. We believe Broadway's successful model can spark China's cultural industry in some way."