Bracing for planned tariffs on their products, Chinese makers of solar-power have cut back production at home and in the United States.

The moves are in response to the Nov 8 ruling by the Commerce Department's International Trade Commission that US solar-panel makers have been hurt by Chinese competitors that, according to Washington, engaged in illegal dumping and received illegal government subsidies.

The ruling, which clears the way for implementing tariffs of as much as 36 percent, capped an ITC investigation that was prompted by an October 2011 complaint from the US unit of Germany's SolarWorld AG. Other US-based solar companies have supported SolarWorld's case.

Special: Chinese enterprises in the US

On Tuesday, the ITC issued a report that said undervalued imports of Chinese panels have caused US competitors to lose market share and prevented the domestic industry from covering production costs.

Suntech Power Holdings Co, the world's biggest maker of solar panels, announced last month that it was halving production at its manufacturing plant in Arizona - to 15 megawatts' worth of solar-panel production a year from a planned 30 MW. (The plant reached 45 MW in annual output within a year of opening in October 2010, however.)

The company has also shrunk manufacturing capacity at its home base in Wuxi, in eastern China's Jiangsu province.

"Trade tariffs restrict free competition and breed inefficiency within the global solar industry," said Walker Frost, a Suntech spokesman in the US. "This makes it harder for businesses to plan their operations and for the solar industry to maintain steady growth.

US ruling on solar panels 'unreasonable'

"We need a global free-trade agreement in clean tech to unwind these trade barriers and encourage the most efficient global solar industry possible. Low-cost solar is a really good thing for the world," he said.

Trina Solar Ltd, founded in 1997 and a leading panel maker, was one of two mandatory respondents to the ITC's tariff case (Suntech being the other). The Changzhou-based company was hit with an import tariff of 23.75 percent - at the low end of the US regulator's range. Smaller Chinese panel makers, or those that didn't respond to the case, face duties of up to 250 percent on their exports.

The tariffs have led the company to reassess production needs and make adjustments, said John Gann, financial director at its US division, Trina Solar Americas, in San Jose, California.

"As a global enterprise, we strive to conform to international and local trade practices in all markets," he said. 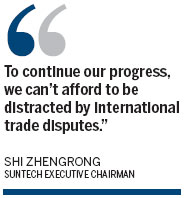 "Obviously, we were very disappointed by the International Trade Commission's vote to impose protectionist trade measures, which we believe may slow solar-related investments in the United States. We prepared for this outcome, and the tariffs will not affect the offering of Trina Solar product lines that are not subject to these tariffs," Gann said, reiterating much of what Trina Chairman and CEO Jifan Gao had stated at the time the ruling was announced.

On Oct 11, more than a year after it filed for federal bankruptcy protection, California-based Solyndra LLC sued Suntech, Trina and Yingli Green Energy Holding Co, over their alleged collusion in pricing. Solyndra, which made thin-film solar cells used in panels, claimed in its antitrust lawsuit that the Chinese firms forced down prices by 75 percent, making it impossible to fulfill contracts signed in 2008. The suit seeks $1.5 billion in compensation and triple damages.