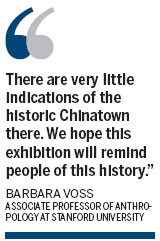 San Francisco's Chinatown is today a living history of Chinese immigration in California, but part of that legacy was lost in a fire 126 years ago in nearby San Jose. Reminders of that community can be seen in a new exhibition that combines contemporary art with artifacts unearthed by archaeologists.

"For today's Chinese-Americans, I think the exhibition may connect them to a longer history of Chinese people in Silicon Valley than we often think of," said Barbara Voss, an associate professor of anthropology at Stanford University.

City Beneath the City is an installation by Chinese-American artist Rene Yung that reveals the history of the community by displaying 60 out of some 2,000 objects excavated in the 1980s from the site of the fire in what had been the heart of San Jose's Chinatown a century earlier.

The selected artifacts in City Beneath the City, which runs through June 30 at the Stanford Archaeology Center, hint at the political, commercial, cultural and social life of a 1,000-resident Chinese community that existed for two decades before the 1887 fire, Voss said.

San Jose is now the third-largest city in California and, as the home of many of the region's tech companies, is sometimes called the "capital" of Silicon Valley.

Yung, who studied archaeology at Stanford University before switching to art, described the color scheme in her work.

"Orange is the symbol of fire, which destroyed this Chinatown in 1887, while blue gives people an image of early Chinese immigrants who used to work hard and build homes under the California sky," she said.

Chinese immigrants to the US began settling in San Jose around 1862. Twenty years later, the first in a series of federal laws discriminating against Chinese and seeking to limit their entry to the US was enacted. The previous influx of Chinese was attracted by California's Gold Rush of the 1840s and '50s and the promise of jobs building the transcontinental railroad.

Congress revisited the legislation five times between 1884 and 1904, imposing ever-tighter limits on Chinese immigration. The laws suspended immigration to the US from China and, for more than 60 years until their repeal in 1943, barred those already in the country from becoming citizens. (Congress in 2012 officially apologized for the discriminatory laws in a resolution sponsored by US Representative Judy Chu, a Chinese-American whose district covers parts of Los Angeles.)

The majority of Chinese-Americans living in California are from families that arrived after 1965, when US policies on immigration from Asia were loosened. Unlike Cantonese-speaking emigrants from Guangdong, in southern China, who came to California between 1850 and 1887, these residents are from all provinces of China and speak Mandarin.

In the 1970s, San Jose began planning to redevelop its downtown. Studies to ensure the work complied with historic-preservation laws documented a Chinatown that had existed in the area, so from 1980 to 1982 archaeologists dug test sites for possible artifacts. These excavations turned up nothing, so the city went ahead with its redevelopment construction.

During construction excavation, however, workers began finding items that apparently survived the 1887 fire on San Jose's Market Street. Local Chinese-Americans heard about these discoveries and urged city officials and archaeologists to assess what had been found.

The city eventually hired a consultant, Archaeological Resource Service, to excavate the Chinatown deposits. This digging was done quickly, amid the frenzy of construction.

"There wasn't any funding for the artifacts to be studied, so eventually the 400 boxes of artifacts were transferred to a city warehouse," Voss explained.

In 2002, the professor was asked if she and her students could help two preservation groups, History San Jose and the Chinese Historical and Cultural Project, catalog and study the items.

In 2011, Voss was contacted by the Institute for Contemporary Arts in San Jose. Officials there were preparing for an art festival and wanted an exhibit that could convey a little-known aspect of Silicon Valley history. In response, the Stanford archaeologists displayed the items at a gallery before moving them to the university campus, where the display grew into City Beneath the City.

Over 10 years, Voss and her Stanford students have indexed and protected about 60 percent of the collected artifacts using advanced preservation techniques. Once they have completed the task, the collection will be returned to the Chinese American Historical Museum at History San Jose.

Chinese-American historian Connie Young Yu describes the local community's history in her book "Chinatown, San Jose, USA": "Most historians estimate that as many as 1,000 Chinese immigrants lived on this single block in downtown San Jose. The center of the block was a street named 'Ah Toy Alley' that was fronted by shops, businesses and restaurants. There was a Chinese Opera house and a temple."

Market Street, she wrote, featured single-family homes of merchants and professionals alongside tenement buildings where workingmen lived. These were laborers in agriculture, railroad construction, mining and other industries. They often lived at their work site, returning to Chinatown between jobs or on weekends to shop, worship at the Buddhist temple and visit friends.

On Chinese holidays, as many as 3,000 people from around the area would come to Market Street to celebrate, according to Yu.

Today, the block is occupied by the Fairmont San Jose, a luxury high-rise hotel that opened in 1987 - exactly 100 years after the Chinatown fire.

"There are very little indications of the historic Chinatown there," Voss said. "We hope this exhibition will remind people of this history."

Willem-Alexander ready to be Dutch King

Can earthquakes be predicted?