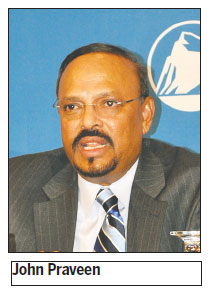 China's slower growth rate and market jitters in Asia over the Federal Reserve's signal that it will withdraw efforts to stimulate the US economy will cause global financial markets to continue to struggle and remain volatile at least until fall, Prudential Financial's chief investment strategist said.

Praveen, part of a panel gathered to discuss Prudential's 2013 mid-year global markets and economic outlook, told a Manhattan media briefing Wednesday that "in the near term, we are going to see markets struggling, because we are going through some transitions".

He said the outlook will be affected both by China's move to a consumption-driven economy and the anticipated change in US markets from liquidity-powered to growth-and-earnings driven as the Fed pulls back on its efforts to help the economy later this year, as recently hinted by Fed Chairman Ben Bernanke.

"The whole global economy has been geared to some extent to 10 percent-plus Chinese growth," Praveen told reporters. "Now we have to adjust to 8 percent Chinese GDP growth."

China's GDP growth rate slowed to 7.7 percent in the first quarter from 7.9 percent in third-quarter 2012, according to the National Bureau of Statistics. For 2013, Citigroup now forecasts China's GDP growth falling to 7.6 percent this year, down from an earlier view of 7.8 percent, and sees GDP dropping even further next year to 7.3 percent.

While a growth slowdown in the world's second-largest economy would directly affect US exports, the larger impact would come from the change in the economic mix from investment-led spending to consumer spending, Praveen said.

"To the extent that China is slowing down, exports to the rest of Asia will slow down, and therefore the slower growth in other Asian economies will probably have a different effect on US exports," he said. The net impact on US exports "is going to be a small negative", Praveen said.

He said the Fed's move to end stimulus efforts - an action known as quantitative easing, or "QE" - will have no direct impact, because the Fed is not buying Chinese bonds.

"Right now, China's government is very happy trying to control credit flows. They are not necessarily worried about capital flows slowing from the US because of QE tapering," Praveen said.

Given the market-rattling effect of Bernanke's remarks, Praveen said: "The Fed needs to do a better job of explaining to the market that taking their foot off the accelerator does not mean they're just slamming on the brakes. Once markets are convinced of that, the positive fundamentals should push markets higher."

Bernanke told reporters after a policy meeting last week that the Fed would start reducing its bond-buying program to lower long-term interest rates, if the economy improves as expected and would end the program by mid-2014. The Fed has been buying $85 billion in Treasuries and mortgage backed securities monthly. Bernanke said the QE would stop when the unemployment rate dropped to 7 percent, which is unlikely to happen until next year.

Promising outlook on US, China investment