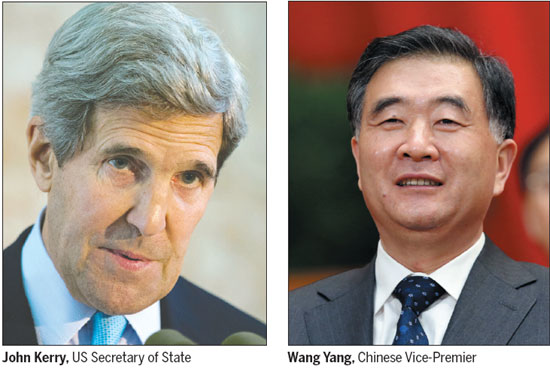 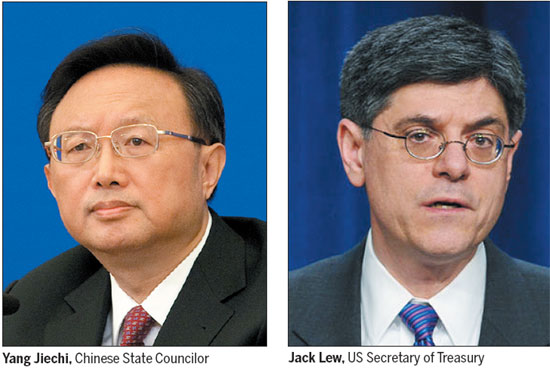 The 5th China-US Strategic and Economic Dialogue on July 10-11 will be the first major platform to deal with bilateral concerns after the Sunnylands summit last month, Chen Weihua reports from Washington.

When a Chinese delegation of a couple of hundred government officials descend on Washington next week for the fifth round of the annual China-US Strategic and Economic Dialogue (S&ED), it will be the first time in years that both sides will see so many new faces.

Just as the informal summit between China's new President Xi Jinping and President Barack Obama at Sunnylands in California four weeks ago was often described as a meeting of "getting to know each other better", it will be the first encounter for many cabinet ministers on both sides.

"Building the kind of relationship between counterparts of the two governments becomes very important in the conduct of the relationship," said Richard Bush, director of the Center for Northeast Asian Policy Studies at the Brookings Institution in Washington.

"The secretary of commerce can pick up the phone and call China's minister of commerce and deal with an issue on the spot," he said. "And that is a good thing, but you have to have a prior personal relationship."

The S&ED, regarded as the most important platform for the two governments to address a wide range of bilateral, regional and global economic and security issues, will be much more than just building personal ties. 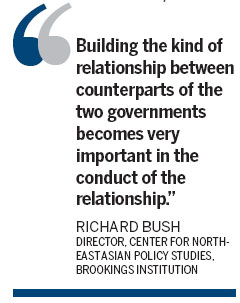 Many US experts, such as Kenneth Lieberthal from Brookings and Nicholas Lardy from the Peterson Institute for International Economics, still regard cyber security as the top issue for the US side, despite the recent revelations by former National Security Agency contractor Edward Snowden of the US's massive surveillance program of China.

As the Chinese government demands an explanation of the US hacking into China's cell-phone companies for message data of millions of Chinese citizens as well as attacking the Tsinghua University's backbone server network, a major one in China, the US side insists that Chinese commercial hacking is different from the government spying on government, which it says "everyone is doing".

Chinese Ambassador to the US Cui Tiankai said that the US has provided no hard evidence that the Chinese government was involved in the alleged hacking of US corporations. China also claims that it is a major victim of cyber attacks, many of which it says have originated in the US.

It will also be the first time for a cyber-security working group, announced by Kerry during his visit to China in April, to deal with the growing tension in the virtual world.

"The Snowden case will certainly juice up that conversation quite a bit," said Lieberthal. "We will see how it plays. Cyber has moved up to the center."

Lardy believes that the Snowden case won't derail the talks given the relatively "low-key response" from the Chinese government.

Besides cyber security, the US side will also want to know more about China's domestic economic reform agenda and will continue to express concern over the protection of intellectual property rights, market access and the role of State-owned enterprises. And the Chinese will likely continue to express their concern about the US restrictions of high-tech exports to China, the quantitative easing, and the US government review process of the increasing Chinese foreign direct investment in the US and some US trade measures deemed protectionist by China.

A House Intelligence Committee report last October accused two Chinese telecom-equipment giants, Huawei Technologies and ZTE, of posing a national security threat. The proposed purchase of Smithfield Foods, the largest pork processor in the US, by China's Shuanghui International, has also been regarded as a possible national security threat by some lawmakers, who will hold a Senate hearing on July 10, coinciding with the opening of the two-day S&ED.

Lardy said the US should do a better job of explaining the review process and provide more information.

"Our treasury secretary and administration (officials) go around saying we have the most open investment environment in the world," said Lardy, a China expert. "I think the perception in China is exactly the opposite."

Many experts and business leaders have argued that a bilateral investment treaty will ensure a smooth relationship between the world's two largest economies, which are also each other's second-largest trading partners.

Lieberthal of Brookings said it will be significant if the two sides have a commitment on such a treaty at the S&ED.

On the security front, China will continue to express displeasure over US arms sales to Taiwan. China remains suspicious of the US pivot to Asia strategy, especially the military part.

The US stance on territorial disputes in the East and South China Seas has been widely regarded in China as biased and emboldening some countries to try to break the status quo.

For years, the Trans-Pacific Partnership (TPP) had also been regarded by Chinese as a US scheme to contain China economically, but the interest expressed by Chinese leaders recently to know more about the US-led free-trade agreement talks has given hope that TPP and RCEP (Regional Comprehensive Economic Partnership), another free-trade framework talk in which China participates, may finally converge to create some kind of Asia-Pacific free-trade agreement.

Jeffrey Schott, a senior fellow at the Peterson Institute who advises the US government on trade issues, said it's not practical for China to join at this moment in the middle of the talks. "The question is how the United States can respond constructively to the very constructive statements made by Chinese officials over the past months about the desire to have more information about the initiative," he said.

Lardy disagreed, saying that "here is a new agreement that China has a chance to participate, shape the outcome and sign what it wants to sign. When it becomes a take-it-or-leave-it thing later a few years down the road, that makes it more difficult for China to come in".

Schott said that Chinese leadership in APEC (Asia-Pacific Economic Cooperation) next year will enable it to bring together the elements of both TPP and RCEP in a new initiative.

Schott said that the TPP negotiations won't end this year as planned and described it as an "overly ambitious target" by leaders of TPP countries, adding that a "very optimistic scenario for concluding the TPP will be next year".

While no one seems to be sure what kind of language regarding TPP may come out of the S&ED, experts agree that climate change will be a highlight at the meetings.

China and the US announced in April the launch of a joint working group on climate change to elevate bilateral cooperation in the field. The agreement between Xi and Obama last month on phasing out hydrofluorocarbon (HFC), a potent greenhouse gas, has been widely applauded by world leaders and environmental groups.

China's 12th Five-Year Plan (2011-15) has set ambitious targets in tackling the country's serious environmental problems and climate change. Although Obama is handicapped by Republicans in Congress, he announced a set of measures last week to fight climate change by using his executive power and bypassing Congress.

Another issue that China and the US have found a growing convergence on is the denuclearization of the Korean peninsula. China signaled a shift of its policy in wake of the third nuclear test conducted by the Democratic People's Republic of Korea in February.

China has endorsed UN Security Council sanctions on DPRK and taken concrete implementation measures, such as Bank of China's closing of accounts by DPRK's Foreign Trade Bank, which was accused by the US of being involved in the nuclear program.

Both Liberthal of Brookings and Douglas Paal, vice-president for studies at Carnegie Endowment for International Peace, believe the China-US military-to-military dialogue also seems more promising now than in previous years.

"Both sides seem to agree that the purpose now is for each military to better understand the strategy and strategic intent of the other. That's something we haven't talked about in a serious way before," said Lieberthal, who served as special assistant to the president for national security affairs in the 1990s.

Bilateral military exchange, which has long lagged behind other programs such as economic, political and people-to-people exchanges, is on the rise. China has accepted the US invitation to join the Rim of the Pacific Exercise (RIMPAC), the world's largest naval drill, in 2014.

Unlike the Sunnylands summit which didn't produce many deliverables except the agreement on HFCs, expectations vary on S&ED, the most important of some 90 bilateral platforms.

While Liberthal of Brookings expressed dissatisfaction at the prospect of seeing many officials on both sides reading talking points at S&ED, a Chinese official who didn't want to be named described the format as "effective and useful."

"After the ministers at the S&ED set the tone, staffers at working level will have a clear direction," the official said.

Some other discussion platforms, such the Joint Commission on Commerce and Trade (JCCT), are main channels to deal with concrete issues, such as trade and investment disputes.

"One such meeting (S&ED) a year is enough to set the tone. But the process would benefit from more frequent meetings at the working levels," said Paal of the Carnegie Endowment for International Peace.

"The leaders should instruct their governments to identify action agendas that are bold and far reaching and demand rigorous agendas for fulfilling the goals," Paal said. "The aim is to keep both bureaucracies focused on positive outcomes to outweigh mutual suspicion and military competition, which will exist alongside the positive agenda."

As officials on both sides have been scrambling to come up with statements and agreements and a list of outcomes from the S&ED talks, Adam Posen, president of the Peterson Institute, said that turning out more agreements irrespective of their quality is the downside of such regular meetings, citing the example of the G8 meeting.

It's also believed that the time is too short for staffers to prepare something major to reflect the goodwill from the Sunnylands summit just four weeks ago, when the two world leaders vowed to build a new type of major-country relationship.

Paal is hopeful about cooperation on climate change and some progress on the understanding of cyber issues, but he said the timing isn't the best for substantial progress.

"Important new directions in Chinese economic policy await the third plenum (of the 18th Party Congress) in the fall. And the US team is still not in place in depth to carry out effective interagency preparation," he said.

Lieberthal said while the S&ED will be the first major platform after the Sunnylands summit, the real test of Sunnylands is three to four years from now.

"As we look back in the rear view mirror, do we see this as the beginning of a new trajectory of US-China relations, or whether it was an interesting event without the kind of follow-up it what was intended to produce," he said.