By Wang Jun and Yu Wei in Houston (China Daily) 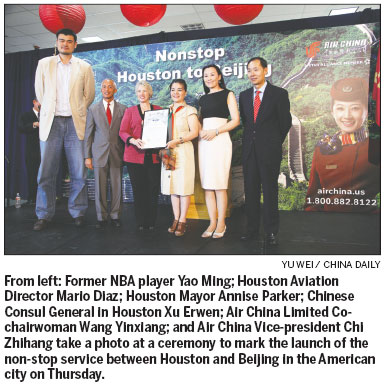 New generation Boeing 777-300ERs will be used for the Beijing-Houston direct service, which will start with four flights a week and, officials say, strengthen ties between the two cities.

Wang Yinxiang, co-chairwoman of Air China Limited, said the new service demonstrates Air China's commitment to expanded connectivity for the mutual benefit of the US and China and their people.

"As the only airline that provides direct connection between Houston and the south central region of the United States and China via Beijing," Wang said. "We are honored to be the cultural, social and economic bridge between these two great destinations."

Annise Parker, mayor of Houston, said that more than 500 local companies were currently doing business in China and total trade between Houston and China had been growing at a compound annual rate of 20.5 percent since 2000.

"With this new direct link, we can only imagine the additional trade and business opportunities to come," said Parker.

Onboard the inaugural flight was Xu Erwen, Chinese consul general in Houston, who called Air China's non-stop service the dream of many people for many years, adding that the new service would boost people-to-people exchanges, as well as friendship and cooperation between Texas and China.

The southwestern American city has been well-known in China ever since former NBA All-star Yao Ming made it his home playing with the Houston Rockets.

Yao, who was also on the inaugural flight, said the journey took just 13.5 hours and was a much shorter ride than his first trip to Houston 10 years ago.

"If there were such a flight as this before, I would have thought about retiring later," he joked, adding that the direct flight will make it easier for other Chinese athletes to play in the US in the future.

Houston and China have enjoyed a strong relationship for decades. China's late leader Deng Xiaoping visited Houston during his historic trip to the US in 1979. Houston also hosted China's first general consulate in the US.

"The airport in Houston is named after my father," he said, "who has always promoted better cooperation and closer ties between the US and China." His father was also head of the US Liaison Office in Beijing from 1974 to 1975.

"So the direct flight from my father's hometown to Beijing is symbolically and practically an important step for relations between our two great countries," Bush said.

Bush congratulated Air China for being "the first to understand the importance of this new route".

No mechanical trouble on Asiana