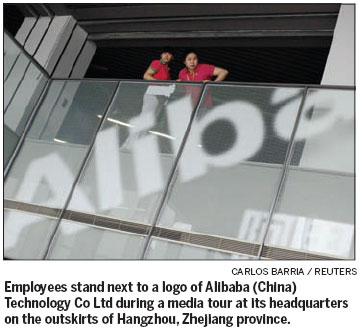 Along with the investment, Alibaba executive vice chairman Joe Tsai will take a seat on the ShopRunner board, the Times said, citing people familiar with the transaction.

The acquisition comes as the Chinese e-commerce giant prepares for a planned IPO, which is widely expected later this year or early next year, but on which exchange remains up in the air. Hong Kong is seen as the most logical choice, but the company hasn't ruled out seeking a US listing.

Some analysts believe Alibaba's investment in ShopRunner as further preparation for its entering the US market and on-going promotion for the upcoming IPO.

Spokesmen for Alibaba and ShopRunner could not be reached for comment.

The acquisition is one of several Alibaba overseas investments in e-commerce websites. Alibaba - the world's largest e-commerce group - made its first US acquisition in 2010 when it acquired small-business sales software company Vendio Services Inc. In June, it also invested in US online sports retailer Fanatics, which makes the ShopRunner deal its second tie with a US e-commerce company in two months.

Lu Zhenwang, founder of Shanghai Wanqing Commerce Consulting, was quoted in National Business Daily as saying that the US is a crucial first step for Alibaba's globalization.

"The acquisition, on the one hand, will help the company understand more about US operating principles. On the other hand, it is also beneficial to the integration of a number of Alibaba's overseas operations," Lu said.

Lu noted the investment will expand Alibaba's worldwide operations and logistics, which have become an important element of its industrial chain.

According to a McKinsey report, China's online retail sales have more than doubled year on year from 2003-2011. From 2011 to 2015, it is estimated the increase will triple, reaching $395 billion.

Transactions made on Taobao and Tmall, the customer-to-customer and business-to-customer websites owned by Alibaba, reached 1 trillion yuan (about $161 billion) last year.

Alibaba's IPO could be valued at $70 billion, based on some analysts' estimates, which would make it one of the biggest Internet IPOs worldwide.

China tops US in phone use

Children with HIV live in fear