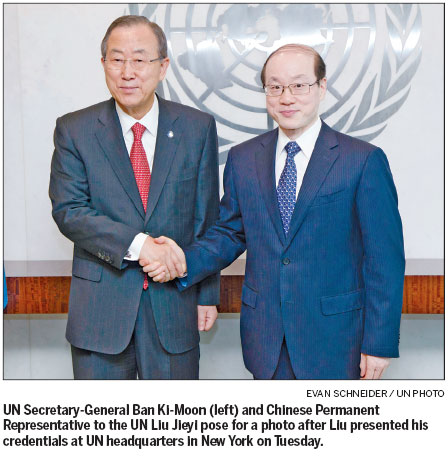 "The United Nations, being the most universal, representative and authoritative international organization, bears the expectations of people all over the world and shoulders a significant mission," Liu told reporters after the ceremony.

Liu, 55, has been vice-minister of the International Department of the Communist Party's Central Committee since 2009. Prior to that, he served in a number of posts in the Ministry of Foreign Affairs, including assistant minister and director-general of arms control.

A native of Beijing, Liu served as a counselor with China's Permanent Mission to the UN between 1995 and 1998. Returning to serve at the Chinese mission makes him "greatly honored with a strong sense of responsibility," he said.

"As a permanent member of the UN Security Council and a major developing country, China has consistently advocated multilateralism and attached importance to the role of the UN," Liu said.

"China will continue to firmly support the UN, uphold the purposes and principles of the UN Charter, and play the role of a responsible major country in the UN system," said the new envoy.

Zhiqun Zhu, a professor of political science and international relations at Bucknell University, said that the veteran diplomat - with such varied experience within the Chinese Foreign Ministry - should perform well in the envoy post.

Liu's appointment comes at a time when the UN is investigating the use of chemical weapons in Syria and the US - one of the five permanent members on the UN Security Council along with China, France, the UK and Russia - is pushing for military intervention against Syria. China is scheduled to hold the Council presidency for the month of November.

A Chinese Foreign Ministry spokesperson said on Monday that any action by the international community should respect the rules of the UN charter and basic rules of international relations, adding that any action should avoid further complicating the Syrian issue and avoid bringing more disruption to the Middle East.

Last week, the British parliament voted against joining any military action against Syria. Following US President Barack Obama's Saturday announcement that he would seek Congressional authorization for strikes against Syria, Congress on Tuesday held its first public hearings about possible US plans for military intervention in response to the alleged sarin gas attack against civilians outside Damascus on Aug 21.

US lawmakers from both parties called for changes in the president's requested legislation on Tuesday, rewording it to restrict the type and duration of any military action that would be authorized, possibly including a ban on US combat forces on the ground, the AP reports.

A new resolution was written on Tuesday by Senators Bob Menendez, D-NJ, and Bob Corker, R-Tenn, which could be voted on by the Senate Foreign Relations Committee as early as today.

Zhu said the new envoy will "clearly and skillfully" defend China's position on the Syrian issue.

"The Chinese Foreign Ministry has already expressed opposition to the unilateral use of force, and in principle, China follows a non-intervention policy and prefers a peaceful and diplomatic settlement to any dispute," said Zhu.

"So as the UN ambassador Liu will argue against unauthorized, unilateral military action against Syrian targets, especially at a time when many people both in and outside of the US remain unconvinced whether Syrian government forces used chemical weapons or not," said Zhu.

"Meanwhile, China does not want to be perceived as an irresponsible major power, and Liu is likely to condemn the use of chemical weapons in Syria's civil war," said Zhu.