The US Department of Agriculture gave four chicken plants in China the go-ahead to send processed meat products to the United States, possibly opening the way for China to eventually send its own bred chicken to the US market.

The USDA's approval will allow the plants to export only products from chickens raised and slaughtered in the US and Canada to be shipped back to the US for sale.

The decision comes after years of requests by China to allow poultry products that are made from Chinese-origin chicken into the US market and amid concern over food safety in China, especially outbreaks of deadly avian influenza or bird flu.

The USDA's approval announced on Friday will allow the plants to export only products from chickens raised and slaughtered in the US and Canada to be shipped back to the US for sale.

The decision, however, has been challenged by some US lawmakers. On Sunday, US Senator Charles E. Schumer called on the USDA to take measures to ensure the safety of chickens processed in China and sold in the US.

"Given Chinese processors' poor track record with regard to food-safety standards, the USDA should be taking every possible step to ensure that the chicken that ends up on our plates and in our McNuggets is safe - and raised right here in the United States - where we have significant oversight and safety standards," said Schumer who wrote a letter to US Secretary of Agriculture Tom Vilsack, calling for on-site audits at the recently approved Chinese chicken processing plants.

"On-off visits to plants neither make a food safety system safe nor ensure that food safety issues will not arise at these plants in the future," DeLauro said in her letter to Vilsack.

The FSIS determined that the China's poultry-processing inspection system is equivalent to that of the US, said Tom Super, spokesman for the National Chicken Council, theWashington-based trade association representing the US chicken industry.

"While we do not look forward to any more imports of chicken into the United States, we are also cognizant of the fact that free trade is a two-way street," he said.

In 2004, the US stopped importing poultry products from China for fear of the bird flu. China then put huge tariffs on American chicken, which the World Trade Organization ruled were too high. In 2006, China asked the US to allow the importing of Chinese chicken. Food- safety concerns and opposition in Congress blocked the request.

The new rules announced by the USDA require the Chinese processing plants to verify that the cooked products exported to the US came from American or Canadian birds, which means no USDA inspector will have to be in the plants.

Since the plants will be exporting processed poultry, the department also will not require country-of-origin labeling and US consumers will not know if the chicken came from China.

"Today's action is the first step towards allowing China to export their own chicken to the US even though there are serious animal-health concerns with avian influenza. Rulemaking would be required for that step to be finalized," Wenonah Hauter, executive director at Food and Water Watch, a Washington-based advocacy group that works to promote food safety, said in a press release.

Hauter questioned whether China's poultry-processing inspection system is equivalent to that of the US' and expressed concerns that there will be no USDA inspector at the poultry processing facilities to make sure the Chinese are processing poultry products from only the approved sources.

The advocacy group also said it believes that the US approval was made based on the desire to help trade negotiators reopen exports of US beef to China, which were banned after mad cow disease was first detected in a US cow in 2003.

"My experience with these officials is that they follow scientific protocols and are not willing to compromise their standards due to outside forces," said Dermot Hayes, professor of economics and finance at Iowa State University.

"I think the USDA is just following scientific protocol," Hayes said. "China deserves as much opportunity to export to the US as any other country."

"I believe that any poultry we import from China will meet our standards and that the volumes will be limited to small quantities of labor intensive products. These products will be frozen and sold into the hotel and restaurant trade where they will be heat treated before consumption," Hayes said.

The USDA approval comes a week after a US security panel cleared a plan by Shuanghui International Holdings Ltd to buy US pork giant Smithfield Foods Inc. 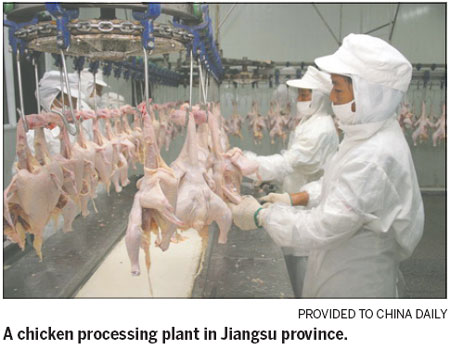 US top carpet maker sets up in China

States laud lifting of ban on hardwood by China

Going global? Not so easy