"That recognition is now driving our partnership on issues from climate change to wildlife trafficking to military consultations and the promotion of balanced growth around the world," he said.

"Importantly, part of our new relationship is a commitment to engage in frank discussion on sensitive issues, particularly where we disagree, where misunderstanding could lead to a miscalculation," said Kerry, who visited China in April.

Syria, the denuclearization of the Korean Peninsula, US rebalancing to Asia Pacific, Iran, climate change and cyber security were among a host of issues the two sides discussed on Thursday.

While the two sides see some common ground on the key issues of Syria and the Korean Peninsula, differences remain.

Wang reiterated that China welcomes the framework agreement reached by the US and Russia.

"We believe that there needs to be early agreement on the decision to be taken by the OPCW (Organization for the Prohibition of Chemical Weapons), and at the same time, the Security Council of the UN also needs to recognize and support this decision," he said. 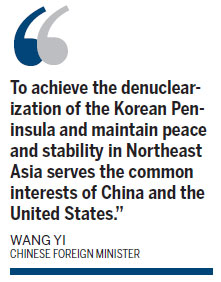 "Ultimately, the issue of Syria needs to be resolved through political means. The Chinese side will continue to play a positive and constructive role in that direction," said Wang, who was a visiting scholar at Georgetown University from 1997-1998.

Kerry said while the US appreciates China's support for a political solution, the two sides have disagreed sharply over how the international community should respond to the Syrian government's use of chemical weapons. "With negotiations ongoing at the Security Council, we look forward to China playing a positive, constructive, important role," he said.

Bonnie Glaser, senior advisor for Asia at the Center for Strategic and International Studies, said the disagreement on Syria will not have a major impact on the US-China relationship. "Syria is not vital to Chinese national interest," she said.

Wang, who is going to New York over the weekend for the 68th session of the UN General Assembly to be held next week, said he is confident that the two sides will reach a new and important agreement regarding the denuclearization of the Korean Peninsula.

"To achieve the denuclearization of the Korean Peninsula and maintain peace and stability in Northeast Asia serves the common interests of China and the United States," said Wang, noting that Thursday was the eighth anniversary of the Sept 19 Joint Statement, a statement of the Six-Party Talks on the denuclearization of the Korean Peninsula. The Six-Party Talks, stalled since 2008, involve the Democratic People's Republic of Korea, the Republic of Korea, China, Japan, Russia and the US.

While the US has insisted that the DPRK's denuclearization be a precondition for the resumption of the Six-Party Talks, the DPRK said it does not accept any preconditions. China has urged the US to show more flexibility to get the talks started.