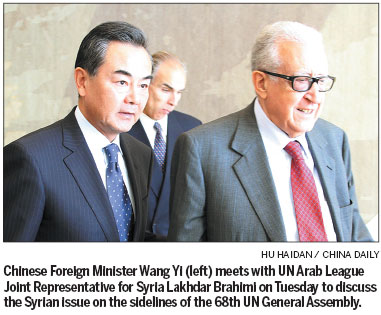 Chinese Foreign Minister Wang Yi, attending the UN General Assembly in New York, had a series of bilateral meetings with his counterparts from other nations prior to his speech at the annual General Debate on Friday.

The foreign minister arrived in New York from Washington on Saturday and met with UN Secretary-General Ban Ki-moon the following day to discuss issues including the crisis in Syria, the denuclearization of the Korean Peninsula, and the situation in Afghanistan.

The Syrian issue has been one of the major topics in the foreign minister's meetings in his US trip. On Tuesday, Wang met with UN Arab League Joint Representative for Syria Lakhdar Brahimi to discuss Syria on the sidelines of the 68th UN General Assembly, which Wang is attending for the first time since assuming his post in March.

Last week, while visiting Washington, Wang and US Secretary of State John Kerry held a joint press conference where each stated their country's stance on Syria.

Wang pointed out that China - as one of the five permanent members of the UN Security Council - plays a "positive and constructive" role in solving the Syria crisis.

On Syria's chemical weapons, Wang said at present it is important for the international community to reach a consensus on the issue as soon as possible and for the UN Security Council to send out a message of unity.

Wang said China welcomes the framework agreement reached recently by the US and Russia on ridding Syria of its chemical weapons.

"Ultimately, the issue of Syria needs to be resolved through political means," said Wang, "The Chinese side will continue to play a positive and constructive role in that direction."

Wang said that China is in favor of the Organization for the Prohibition of Chemical Weapons (OPCW) carrying out its work in an "objective, fair and professional manner" and is willing to send experts to join the process of inspecting and destroying Syria's chemical weapons.

The foreign minister said that the destruction of Syria's chemical weapons and a political settlement of the Syria issue should be advanced in a "parallel" fashion.

China said that its position on the use of chemical weapons is "consistent and clear" and it opposes the use of these weapons by anyone including Syria. It had called for and supported a "full and impartial" investigation by UN chemical weapons inspectors, whose recent results confirmed the use of sarin in a majority of the environmental samples from Syria. China had also warned that unilateral military actions that bypass the Security Council will have serious impact on the situation in Syria and the whole Middle East region.

The annual General Debate kicked off on Tuesday where UN member state leaders are scheduled to make speeches on pressing international issues. More than 130 heads of state, heads of government and deputy prime ministers will address the Assembly.

President Barack Obama, who spoke on the first day of the debate, said the Syrian government took a "first step" by giving an accounting of its stockpiles and it's time for a "strong" Security Council resolution to verify that the government is keeping its commitments.

"And there must be consequences if they fail to do so," Obama said. "If we cannot agree even on this, then it will show that the United Nations is incapable of enforcing the most basic of international laws."