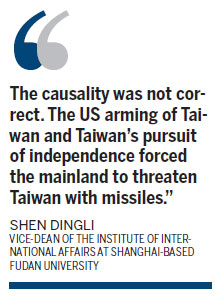 China again raised its opposition on Thursday to the United States for its arms sales to Taiwan, a day after the first of a batch of US anti-submarine aircraft landed on the island.

Chinese Foreign Ministry spokesman Hong Lei said China firmly opposes arms sales to Taiwan by any country. "This stance is clear-cut and consistent," he told a press briefing in Beijing on Thursday.

"We urge the US to honor the One China Policy and the principles enshrined in the three Joint Communiques, stop any form of arms sale to Taiwan and stop doing things that are detrimental to China-US relations and the peaceful growth of bilateral cross-straits relations," Hong said.

He said the Chinese side has lodged its complaint to the US side over the arms sales and the delivery of anti-submarine aircraft.

News reports show that the Taiwan military received the first of 12 anti-submarine aircraft from the US on Wednesday. Television footage showed the P-3C Orion patrol aircraft landing at an air base in southern Pingtung county, with water splashing on the plane in a brief welcome ceremony. The other 11 planes are scheduled for delivery by the end of 2015.

The aircraft is reportedly to be the most capable of Lockheed's P-3 family of submarine-detecting aircraft. In addition to detecting ships on and below the surface, it also has powerful anti-ship and anti-submarine attack capabilities.

The deal was agreed to by Washington in 2007 to sell Taiwan the refurbished P-3C Orion patrol aircraft, which reportedly will expand the surveillance range of Taipei's anti-submarine fleet by tenfold. The fleet will cost around $1.96 billion.

For decades, US arms sales to Taiwan have been a destabilizing factor in the bilateral relationship between China and the US, causing the suspension and cancellation of high-level visits and military exchanges. In 2010 and 2011, China announced it would suspend military contacts with the US in the wake of its arms sales to Taiwan.

To Chinese on the mainland, the continuous and expanding US arms sales to Taiwan is simply unacceptable, especially as the relationship across the straits has turned better than ever since 2008 after Ma Ying-jeou became the leader in Taiwan. Many have regarded it as US interference in China's domestic affairs.

While the US sold arms amounting to only a few billion dollars in the first of the past three decades, the last two decades saw sales balloon to $27 billion from $19 billion, according to Guan Youfei, director of the foreign affairs office of China's Ministry of Defense.

Guan, who accompanied Defense Minister Chang Wanquan on his visit to the US last month, described the arms sales as a major stumbling block in their bilateral relationship.

China and the US announced a joint communique on Aug 17, 1982, which states that the US government does not seek to carry out a long-term policy of arms sales to Taiwan and that its arms sales to Taiwan will not exceed, either in qualitative or in quantitative terms, the level of those supplied in recent years since the establishment of diplomatic relations between the US and China in 1979.

The US intended gradually to reduce its arms sales to Taiwan, leading, over a period of time, to a final resolution, according to the communique.

Shen Dingli, vice-dean of the Institute of International Affairs at Shanghai-based Fudan University, said it is wrong for people to argue that US arms sales to Taiwan are to help the island defend against the missiles on the Chinese mainland side.

"The causality was not correct. The US arming of Taiwan and Taiwan's pursuit of independence forced the mainland to threaten Taiwan with missiles," he said.

Alan Romberg, director of the East Asia program at Stimson Center in Washington, said he has no idea what the level of US arms sales to Taiwan will be in the next round. "But in principle, I don't think the issue will go away because the US will continue to sell arms, and Beijing will continue to object," he told China Daily on Thursday.

Romberg believes the nature of the sales, namely the content of the arms, will matter a lot to China's reaction.

AFP contributed to the reporting.

China to join talks on trade in services