Qingdao Haier Co's deal to sell 10 percent of itself to US buyout firm KKR & Co for $552 million will put China's dominant appliance-maker on track to reap a windfall from the country's push for urbanization, a KKR executive said.

In a release announcing the sale on Monday, KKR Greater China CEO David Liu said the private-equity company would assist the Shanghai-listed unit of Haier Group "in its next phase of growth by capitalizing on the opportunities created by China's continued urbanization and increasing consumer-income trend".

China is moving a quarter of a billion rural residents into newly built cities to boost domestic consumption and revive a slowing economy. The government's goal is to fully integrate 70 percent of the country's population, or roughly 900 million people, into city living by 2025.

That influx of rural residents into cities is expected to dramatically boost demand for many consumer items that Qingdao Haier makes and sells.

Under the agreement, Qingdao Haier will sell 299.5 million shares at 11.29 yuan ($1.84) each to New York-based KKR. The sale price represents a 15 percent discount to Qingdao Haier's price of 13.32 yuan on Sept 12, when its shares were suspended from trading. KKR also would get one of Qingdao Haier's nine board seats. 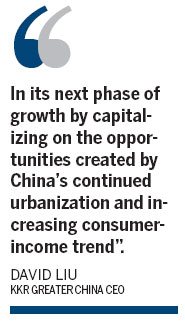 The stake sale also will bring Qingdao Haier help in accelerating its "international expansion", Liu said. Although Haier Group has a leading 27.2 percent share of the appliance market in China, its global market share is a much smaller 9.6 percent, tying it with US rival Whirlpool Corp.

Gwynn Guilford, a former hedge-fund analyst based in China, says Haier's push into developed markets is fueled by its desire to boost profit margins.

"Even as Haier has broken into global markets, its margins suggest that the bulk of those sales are in emerging markets like India or Pakistan, where prices are much lower than those in say, Canada," Guilford wrote in the online news site Quartz.

Boosting the company's brand profile overseas is vital because "wealthy consumers are unwilling to pay the same premiums for Haier that they shell out for Western and Japanese brands", Guilford wrote.

Acquisitions would bring Qingdao Haier new Western sales channels to tap and technology to adapt to its own products, Guilford wrote.