US companies in China feel squeeze as economy cools 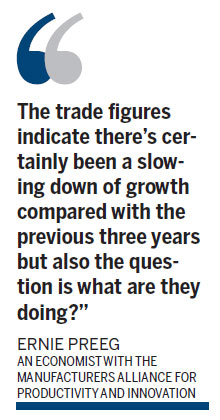 It was early October. Sales at fast-food restaurant chain Yum Brands Inc were taking a hit amid a late 2012 supplier controversy and avian-flu fears. CEO David Novak told analysts, "I've always said that our China business will have its ups and downs, and this year is clearly proving to be one of those downs".

Novak's words proved prophetic. The Kentucky-based operator of KFC, Pizza Hut and Taco Bell restaurants would eventually report an 11 percent slide in sales at stores open at least a year for the quarter through Sept 7. It also forecast that sales would decline this quarter as well.

But Yum isn't alone among Western companies that have reported running into trouble in the past several months in China - a still-growing market long considered a bright sign at a time of global financial weakness and a beacon for corporate investment aimed at tapping the country's newly prosperous middle class.

Third-quarter results reflect the toll that China's cooling economy is taking on some US companies' results. Analysts estimate that third-quarter revenue at companies in the Standard and Poor's 500 Index rose just 3.2 percent, according to Thomson Reuters. In Europe, revenue is expected to slip 1.9 percent.

At the other end of the earnings spectrum, strong spending in China on automotive-related products, healthcare and environmental items boosted sales in those sectors for some US companies.

Among the stricken companies was software giant Microsoft Corp. The Seattle-based company said revenue in China for the latest quarter dropped amid "challenging" economic conditions.

Danaher Corp, a maker of water filters, printing equipment and medical devices, said revenue growth slowed to a low single digit percentage in China in the first quarter from double-digit growth in the second quarter. CEO Lawrence Culp told analysts in a conference call that "most" of the Washington-based company's industrial businesses "continue to see sales declines in China".

International Business Machines Corp, which gets 5 percent of its revenue from China, suffered a 40 percent plunge in hardware sales due to weaker demand in the country. CFO Mark Loughridge blamed "execution problems" in a high-growth market, and on China's economic reform process, which is shifting the country to a consumption driven model from investment and export driven. The latter "significantly" slowed decisions on orders from state-owned enterprises and the public sector, Loughridge said.

Companies' difficulties in China came despite the country's third-quarter growth rate increasing 7.8 percent from a year earlier, compared with a smaller 7.5 percent increase in the previous quarter. The rebound - driven by government stimulus, the delayed effects of a big expansion of credit earlier in the year, and a modest uptick in global demand for Chinese manufacturers - put China on track to beat its 2013 target of 7.5 percent GDP growth. But significantly weaker factory output and other data suggest the expansion won't last, economists say.

Ernie Preeg, an economist and trade expert with the Virginia-based Manufacturers Alliance for Productivity and Innovation, interpreted the data as showing that "production is still growing faster than GDP. That indicates their grand strategy of shifting resources to personal consumption and domestic needs isn't happening."

"They have said that they want to increase personal consumption, which means a little less investment and a little less export surplus and growth in exports.

"If they really want to get consumption up to 40 or 45 percent, then the growth in personal consumption has to be big, big double-digit growth each year."

Preeg said the combination of a slowdown in third-quarter exports and a trade surplus that was flat but at $202 billion "still quite large by any historical standard" suggests that global growth "may be slowing a bit more this year". For the first nine months of the year, Chinese exports rose 8 percent and the trade surplus was up 5 percent to $576 billion.

"The trade figures indicate there's certainly been a slowing down of growth compared with the previous three years but also the question is what are they doing?" Preeg asked.

When National Bureau of Statistics spokesman Sheng Laiyun announced China's latest economic results at a news conference three weeks ago, he said: "We need to pay attention to the changes in some economic indicators for September. Declines in some indicators reflect market conditions as well as the fact that some innate structures haven't seen fundamental improvements."

Zhang Zhiwei, an economist at Nomura, called the recovery "strong, but unhealthy and unsustainable".

"The economic recovery in the third quarter is not a healthy one, and will only exacerbate existing economic imbalances," he said. "The economy faces the rising risk of both a systemic financial crisis and an environmental crisis."

Russian meteor studied for clues to next one