By Zhao Lei on board the Liaoning, South China Sea (China Daily USA)

China's first aircraft carrier, the Liaoning, has conducted more than 100 tests and training tasks since early December, when it began a training mission in the South China Sea, the navy said on Sunday.

"The Liaoning successfully performed several tests of the combat system today and organized for the first time comprehensive combat training," the People's Liberation Army navy said in a statement. "Through this operation, we tested the carrier's combat capability and tried the performance of its propulsion and seaworthiness."

This is the first time the Liaoning has made a long-distance training voyage since it was commissioned into the PLA navy last year, the statement said, adding that the mission is characterized by a large number of tests, rigorous standards, complicated circumstances as well as collaboration with multiple military units.

The ship left its homeport of Qingdao, Shandong province, on Nov 26 and anchored at a naval base in Sanya, Hainan province, three days later. On Dec 5, it set out on the training mission. 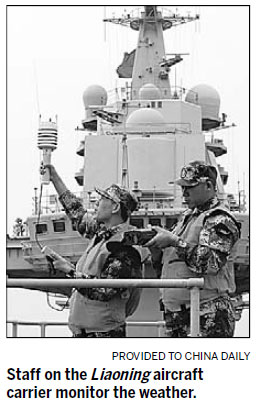 Two missile destroyers, the Shenyang and Shijiazhuang, and two missile frigates, the Yantai and Weifang, participated in the mission. They escorted the carrier along the whole voyage from Qingdao to Sanya.

"The South China Sea has deep waters, strong wind and big waves, making it a suitable place for the aircraft carrier to conduct tests and training," said Senior Captain Zhang Zheng, captain of the Liaoning.

Crewmembers also have performed a series of tests on items such as the ship structure's resistance to stress, sailing speed in deep waters and stability of weapons and equipment, he added, noting that combat departments practiced exercises to defend incoming hostile aircraft, ships and submarines.

Several types of aircraft, combat ships and submarines were dispatched to cooperate with the carrier during the mission, which simulates real combat situations, according to Zhang.

After entering active service in September 2012, the Liaoning has carried out 12 sea trials and tests, including landings and takeoffs for the J-15 fighter jet.

The ship is still in the test and exercise stage, according to Senior Captain Mei Wen, Liaoning's political commissar.

"We have commanded the basic capability to operate and coordinate fighter jets and helicopters with the carrier," Mei said. "We have accumulated much experience in logistic support for the J-15 fighters and improved a lot in terms of damage control and handling of equipment malfunctions."

Committee of 100 seeks to tackle 'sensitive' images about China

China's IPR courts 'would be helpful'

Castro urges US to respect differences with Cuba