Evolving from an excellent student into a renowned entrepreneur, Huang Qin sees ambition as his guiding principle.

"Ambition is as precious as gold. Where there is ambition, there is a chance," Huang said.

"We are always looking for miracles in the outside world, but miracles actually exist inside," he said.

As one of the top students in Hunan province, Huang was admitted to the University of Science and Technology of China in Anhui province at the age of only 14.

Four years later he received a scholarship to the renowned Massachusetts Institute of Technology as the first Chinese student majoring in computer science.

His outstanding academic performance eventually earned Huang the title of "student of the year" at MIT. 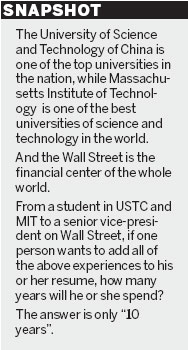 In addition to computer science, Huang also had a great interest in economics.

A solid foundation in mathematics, finance and economics has endowed him with a unique perspective on changes in the world financial market.

After graduation, he worked as a financial analyst at Prudential Securities on Wall Street in New York.

There Huang developed his own mathematical model known as the "marvelous Chinese prediction" by his clients.

Though he had a high salary and a promising career, Huang decided to start his own business in China.

After analyzing the business environment, in 1999, he established a university information website for Chinese students called Netbig.

It soon turned out to be a huge success.

Huang is only one example of successful Chinese entrepreneurs on Wall Street.

Apart from being Chinese and young, they all share another similarity.

All of them graduated from the School of the Gifted Young at the University of Science and Technology of China.

Over the past 35 years, the school developed three types of elite education.

The earliest enrolled students under the age of 16. Another is similar to honors programs in the US.

The most recent approach is the "innovation class" that began in 2010.

Based on recommendations, it accepts gifted students as an innovative way to develop the school itself.

The admission process requires every applicant to take the gaokao, or national college entrance exam.

The test score is first criterion to select applicants.

Then the eligible students will receive notification for a two-day interview.

On the first day, students take math and physics exams to text the authenticity of their gaokao score.

On the second day, two specialized lessons imparting on new knowledge are given, after which students are immediately tested.

In the first year of college, students are required to learn all basic courses.

The flexible educational system then gives students the freedom of choosing a major, but also adds interdisciplinary learning that can greatly help their further development, according to the school.Although the teaching standards at SGY are high, it is the students themselves who push their achievements beyond expectations.

The students were often in the top 10 percent of their classes before. Many challenge themselves to make breakthroughs.

One is Liu Zhongqing, who graduated from the school in 1987.

Though he received five job offers upon graduation, Liu describes himself as a "restless" man.

"There are many opportunities in China and job-hopping gives me chances to learn more," he said.

Liu's courage stems from his innovative and "restless" character, a common trait among SGY students. "What matters most is innovation and courage," said a student.

Yu Deguang contributed to this story