By Zhang Yuwei at the United Nations (China Daily USA)

China's Permanent Representative to the United Nations on Wednesday condemned Japanese Prime Minster Shinzo Abe's recent visit to a war memorial, warning Japan that it is taking on "a very dangerous path" and should correct its mistake.

The memorial "is the incarnation of the militarism of Japan and also a spiritual tool to wage wars of aggression against other countries," Liu Jieyi, China's envoy to the UN, told reporters after a Security Council meeting on Wednesday.

"It is the duty of the international community to safeguard - by working together - the principles and purposes of the (UN) Charter and to avoid any recurrence or any erroneous attitude that might take a country down a very dangerous path," said Liu, adding that Abe's gesture could be a breach of the UN Charter. 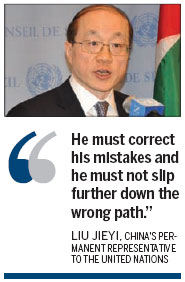 Abe's visit to the Yasukuni Shrine - a memorial that honors, among others, 14 of Japan's World War II Class-A war criminals - on Dec 26 has sparked criticism from neighboring countries that were affected by Japanese aggression during World War II, including China and the Republic of Korea (ROK).

The United States - Japan's traditional ally since the war - has also criticized Abe's visit, saying it was "disappointed that Japan's leadership has taken an action that will exacerbate tensions with Japan's neighbors".

Liu called for the international community to issue a "warning to the fact that Abe must correct his erroneous outlook of history".

"He must correct his mistakes and he must not slip further down the wrong path," he added.

The visit by Abe - marking his first anniversary in office - was the first time in seven years that a sitting Japanese prime minister visited the shrine where the war criminals, convicted by an Allied tribunal after the war, are enshrined.

"The question inevitably arises as to what Abe is up to, where does he intend to take his country?" Liu asked.

"It all boils down to whether the leader of a country should stand on the side of maintaining the principles and purposes of the Charter of the United Nations or to side with war criminals," said Liu.

Also on Wednesday, China's Foreign Ministry spokeswoman Hua Chunying urged the Japanese leader to listen to the international community and correct his mistake that has hurt the feelings of people in the victimized countries of WWII.

On Dec 30, UN Secretary General Ban Ki-moon issued a statement through his spokesperson on Abe's visit. Ban urged countries in the region to "come to a common view and understanding of their shared history" and "stresses the need to be sensitive to the feelings of others, especially the memories of victims, and focus on building mutual trust and a stronger partnership".

Abe's visit has also heightened tensions between Japan and China over the disputed Diaoyu Islands.

Japan recently invited some 100 Western journalists to the country to elaborate on its territorial disputes with China and the ROK, Xinhua reported.

Hua calls that a "propaganda campaign" by Japan and urged Tokyo to repent its history of aggression. and make practical efforts to mend ties with its neighboring nations.