Increasing ties between China and the city of Detroit will benefit both sides, particularly in helping China to solve growth-related problems. That was the message of the Detroit Chinese Business Association's 2014 Chinese New Year Gala.

"We all can benefit exponentially by transforming this city," DCBA business and community development director Milan Stevanovich said in an interview during the black-tie dinner at the Cobo Center in downtown Detroit.

DCBA is a 19-year-old non-profit organization that focuses on developing and promoting US-China business, trades and exchange. Its strength is matchmaking - putting Chinese and US companies together to pave the way for dozens of deals and business moves, such as the $500 million acquisition in 2010 by Pacific Century Motors of steering-maker Nexteer Automotive and Wanxiang Group's $250 million purchase last year of US battery maker A123 Systems Inc.

On Feb 28, the day after the gala, the organization showed again how influential it can be as Hai'an county in China's Jiangsu province signed a memorandum of understanding with Michigan's Oakland county, an affluent region that is part of the Detroit metropolitan area. Under the understanding reached by Hai'an Mayor Lu Weidong and Oakland County Executive L. Brooks Patterson, Magni Group Inc, a Birmingham, Michigan-based supplier of protective metal coatings to the automotive industry, has agreed to expand operations and build a plant in Hai'an, Patterson said in a release.

The gala, which drew 435 guests and included numerous Michigan and China government, industry and academia representatives, is one way DCBA promotes business opportunities for its sponsors and members. That role has become increasingly important as Detroit, the heart of the US automotive industry, crawls back from an historic bankruptcy filing last summer and Michigan confronts an 8.4 percent unemployment rate.

Snyder, a Republican who has announced he will seek a second term as governor in the November election, drew a big hand when he reiterated his views on immigration. In January, the former chairman of computer maker Gateway Inc and co-founder of the Ardesta LLC venture capital firm asked the federal government to set aside thousands of work visas for highly skilled immigrants willing to live and work in Detroit for five years.

Although visas are offered every year to legal immigrants who have advanced degrees or show exceptional ability in certain fields, the visas are not allocated by region or state. To advance with his proposal, Snyder would need the Obama administration's support just when immigration reform is a stormy political issue.

"I want to welcome people globally," Snyder told reporters in an impromptu press conference outside the ballroom where the gala was held Feb 27 evening. "Right now, we have 5,000 foreign students who get a degree from a Michigan public university every year. Of that, about 1,800 are getting a master's degree or a doctoral degree in science, technology, engineering or math. These are individuals who create jobs wherever they go in terms of employing other people."

He cited a study showing that for every job that goes to an immigrant, 2.5 are created for US-born citizens.

Detroit is no stranger to immigration. The auto industry's growth attracted immigrants from Europe and migrants from across the US, turning Detroit into the fourth largest US city by 1920. Amid companies' shifting operations to the suburbs, the decline in US manufacturing and foreign automakers' taking away market share, Detroit's population has steadily declined from 1.8 million in the 1950s to about 713,000 in 2010.

The way America became great "was by embracing immigration", Snyder told the audience. "Let's continue on that path."

While many of the state's trade talks with China have been automotive-related - mostly concerning parts supply as well as research and development, where Michigan is a national leader - Snyder said he'd like to "continue to expand beyond the auto industry".

The "next step" in deepening the Michigan-China relationship is holding more events like the gala, the governor said. "Great events like this - that continue the dialogue in a more informal fashion, because (success) is about (fostering) relationships," he said.

Following a performance of the traditional Chinese New Year lion dance to welcome the Year of the Horse, DCBA President Jerry Xu opened the gala by extolling the organization's ability to function as a bridge for Chinese investors and Michigan entrepreneurs. Lu said Michigan's pursuit of a relationship with China has pushed the county's trade with the state to an all-time high. 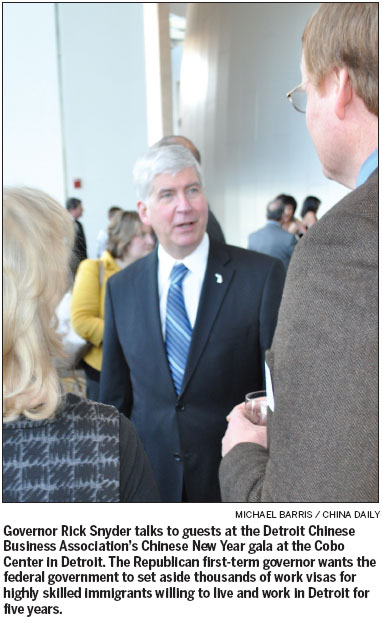 Travel the world via the Times Show

China: no one is above the law