Chinese President Xi Jinping called for respect of a country's cyber-space sovereignty on Wednesday, telling the Brazilian congress that "there are no double standards in the information sector and every country has the right to preserve its own information security".

Xi remarks were made against the backdrop of continuing revelations about extensive spying by the United States on other countries, including China, Brazil and Russia and even some US allies.

During the 30-minute speech, Xi said the Internet's rapid development poses new challenges to the sovereignty, security and interest of a country, and should be handled seriously.

Although the Internet is highly globalized, the sovereignty of the information sector of every country should not be violated, Xi said.

"No matter how developed a country's Internet technology is, it just cannot violate the information sovereignty of other countries".

There also should not be a scenario of one country or some countries having a secure Internet, while the others don't, according to Xi, adding that a country cannot pursue its own Internet security at the price of threatening the security of other countries.

The statement on cyber-space sovereignty is part of Xi's emphasis for both China and Brazil, as two important emerging economies, to take on more international responsibility.

Brazilian President Dilma Rousseff canceled a planned state visit to the US last year after documents provided by former US intelligence contractor Edward Snowden revealed that the US National Security Agency had intercepted her personal e-mails and targeted the communications of Petrobras, the Brazilian state oil company.

Rousseff sponsored a debate about online spying at the UN General Assembly, which ended in December with the adoption of a resolution reaffirming the right to Internet privacy.

In the just-concluded BRICS summit of leaders from Russia, China, Brazil, India and South Africa, a joint declaration issued on Tuesday said the five countries agree that"it is necessary to preserve the information and communication technologies, particularly the Internet, as an instrument of peace and development and to prevent its use as a weapon."

Russia has proposed a BRICS agreement on cooperation in the field.

Joao Nogueira, former president of the Institute of International Relations of Pontificia Universidade Catolica do Rio de Janeiro, said: "It is a very important moment for President Xi Jinping to mention this issue in the BRICS summit because it can help to push the situation ahead and Brazil is in line with China's stand."

Nogueira said it is important to build a more multilateral-governance of the Internet such as introducing the United Nations into the system. "Xi's words can urge the related parts to further the negotiations and discuss all the issues involved,"he added.

Xi also raised in his speech China's willingness to strengthen ties with Brazil and other Latin American countries. 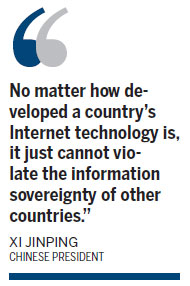 "China is willing to join efforts with Brazil and other Latin American countries to become good partners that make progress together," he said.

Xi will meet leaders from the Latin American and Caribbean countries on Thursday and hold bilateral talks with Rousseff.

The leaders are expected to announce the establishment of the China-CELAC (Community of Latin American and Caribbean States) Forum.

China is one of the top choices for such cooperation because its increasing investments would improve Latin American countries' infrastructure and boost employment, and it has never interfered in other nations' internal affairs, Xu said.

Frequent visits to the region by Chinese leaders have shown the importance that Beijing attaches to the region, and the establishment of the China-CELAC forum will give inject impetus to their ties, said Xu.

Zhang Fan contributed to this story.

China increases holdings of US securities