China's decision to implement a coal tariff on imports starting Wednesday could have a negative effect on some producers' operations, especially those groups working immediately in the world's second-largest economy.

The recent changes to taxes on coal supplies could put a crimp in coal's ability to rebound in the short term, said Brian Yu, a senior analyst who covers mining for Citigroup Inc.

The entire market may be impacted by the imposition of the tariffs but producers with direct exposure to China are likely to see the largest impact, Yu told Forbes.

On Oct 9, the Chinese tariff committee decided to put a 3 percent tax on anthracite and coking coal, a 6 percent hike on thermal coal supplies and a 5 percent fee on briquettes, an alternative fuel source manufactured from coal.

Import taxes for all coals, with the exception of coking coal, were set at 6 percent prior to 2005 before they were scrapped two years later.

Serene Lim, an analyst at Standard Chartered PLC, a British multinational financial services firm, said that the proposed coal tariffs are a way for China to "protect its local miners".

"Given that the tariff also covers coking coal, Australia, being the top supplier to China, is likely going to be the most affected," Lim told Reuters. 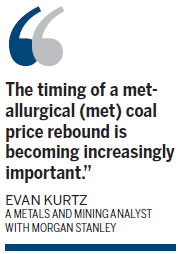 China is the world's top coal producer and consumer, based on data from the World Coal Association, and the country saw imports rise to 327 million tons in 2013, accounting for about 10 percent of the country's total consumption.

Based on Yu's coverage list, Canada's Teck Resources Ltd and the US' Peabody Energy Corp are the global coal companies with the largest exposure to the Chinese market, at 25 percent and 10 percent of last year's total sales, respectively.

Others such as Arch Coal, Alpha Natural Resources and CONSOL Energy Inc recorded sales volumes of less than 20 percent in Asia, Yu said.

Thermal coal prices have fallen in the past year and are nearing their lowest levels in five years, according to Nomura Holdings Inc.

"The timing of a metallurgical (met) coal price rebound is becoming increasingly important," Evan Kurtz, a metals and mining analyst with Morgan Stanley, said in a recent research note.

Based on the latest data from the US Energy Information Administration, US thermal coal exports to China totaled 83,940 short tons in the first quarter of 2014, compared with nearly 700,000 short tons of met coal over the same period in 2013, according to Platts, a leading global provider of data for the energy, petrochemicals, metals and agriculture markets.

Forbes reported on Oct 10 that many top US coal producers have seen big drops in recent months due to a number of factors, including deteriorating fundamentals for the US thermal coal markets, reduced exports and concerns about shifts from coal- to gas-based power supplies.

China is one of the world's largest markets for energy consumption, but some experts believe China can make significant headway in the natural gas sector by exploiting technology to tap its potentially huge reserves of shale gas.

A September report published by Columbia University said that though China has "a huge shale gas resource," production of shale gas in China is "just starting" to take shape and "will not be substantial" in the next few years.

David Sandalow, a fellow at Columbia and one of the authors of the report, said at a conference on Sept 11 that although shale gas has some potential the Chinese penchant for a coal-based fuel supply is readily apparent and not changing anytime soon.