After the establishment of diplomatic relations between China and the US in 1979, Coca-Cola became one of the first international brands to re-enter the Chinese market.

Fast-forward more than 30 years, and the two soft-drink giants are still battling for market share. But now there are plenty of other soft drinks for Chinese consumers, according to Suzanna Clarke, head of beverages for Canadean, a market research firm focused on consumer goods.

"When considering Coca-Cola and PepsiCo's presence in the Chinese soft drinks market, their overall share has battled to remain at the same level compared to 10 years ago as domestic production has increased," Clarke wrote in an email to China Daily. "But the per capita consumption of carbonates is still increasing as their reach is tapping in to more urban areas of China,"

Global soft drinks volumes expanded more than 3 percent in 2014, with the value of sales climbing by more than 6 percent to $867.4 billion, data from Euromonitor showed.

The US is the world's largest soft drinks market, in both value and volume, but markets such as China, Brazil and Mexico have grown in recent years, Euromonitor said in January.

"It is [these] other soft drinks categories that are set to outpace carbonates consumption — notably packaged water, still drinks, iced tea and energy drinks," Clarke said.

The Coca-Cola Co maintains an edge over PepsiCo in the China carbonated soft drinks (CSD) market, with a share of 63 percent in 2014, according to Euromonitor. PepsiCo's share was nearly 30 percent, according to an April 22 research note from Bill Schmitz, an analyst who covers PepsiCo and Coca-Cola for Deutsche Bank.

"Today China is already one of the largest liquid refreshment beverage (LRB) markets in the world and will be a key contributor to the growth of the global beverage sector," a spokesman with PepsiCo Greater China Region said in an e-mail to China Daily. "China remains an attractive consumer market; total consumption has grown four times in the last decade, well above the rest of the world."

Pepsi's offerings in China include Pepsi-Cola, Pepsi Light (Diet Pepsi), 7-Up and Mirinda. PepsiCo is also responsible for a line of non-carbonated drinks and juices under the Gatorade and Tropicana brand lines, as well as foodstuffs and snack items.

In 2012, PepsiCo's Asian R&D Center opened in Shanghai. Pepsi also announced a deal with Tingyi-Asahi Beverages (TAB) in 2012 to make it the franchise bottler in China. The partnership is one of the largest LRB systems in China, with more than 70 plants in operation.

On April 17, Coca-Cola announced it would buy the beverage business of China Culianwang Beverages Holdings Ltd for $400.5 million. The deal gives it a foothold in the multi-grain drinks category, a "growing beverage category in China", Coke said in a statement.

Coca-Cola now has more than 10 brands and 50 flavors of beverages in China, including sodas like Coca-Cola, Diet Coke, Fanta and Sprite. Beyond soft drinks, Coca-Cola offers sparkling drinks, juices, tea, water and coffee.

Henrique Braun, the president of Coca-Cola's Greater China & Korea Business Unit, told China Daily that through 2014, the company had invested $9 billion in its China operations.

"We continue to view China as an attractive market with a lot of opportunities for all beverages companies to grow," Braun said in an e-mail.

Ali Dibadj, an analyst who covers Coke and Pepsi for Sanford C Bernstein and Co, said the brand recognition for the two is "quite high" in China.

"Although, Coca-Cola has much higher share," Dibadj wrote. "Moreover, recently, Pepsi is losing share to Coca-Cola especially since Pepsi sold the right to bottle its product to Tingyi."

"Trends are clear that per capita consumption is rising, even though the growth has slowed," Dibadj wrote. "The penetration of the category is still quite low, so it will grow, even as health and wellness becomes a growing concern."

Reuters contributed to this report. 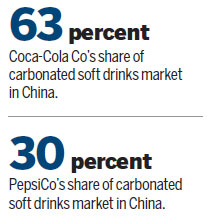