China's latest weapons will be featured along with veteran resistance fighters in a grand parade in Tian'anmen Square on September 3 marking the 70th anniversary of the end of World War II.

President Xi Jinping will speak at the event and present medals to the veterans or their family members. Some foreign troops and Kuomintang veterans are being invited to take part in the parade.

Xi's appearance at the event was announced by Wang Shiming, deputy head of the Publicity Department of the Communist Party of China Central Committee, at a news conference on June 23.

The invitations to foreign troops have already been sent out, but the list of parade participants has still to be decided, according to Qu Rui, a major-general and deputy director of the parade steering group office.

Qu said it is the first time that China has invited military forces from other countries to send representatives to take part in its victory anniversary parade.

It is also the first time that the Chinese mainland has invited Kuomintang veterans to the parade. 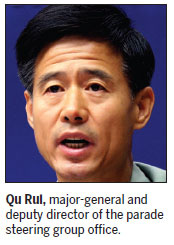 The main weaponry and equipment used in active service will feature in the parade, with most being displayed for the first time, according to organizers.

Representatives of war veterans, civilians who provided support for the army during the war, as well as members of victims' families will also join the parade.

The troops to be reviewed will come from seven departments, including the PLA navy and air force and the Second Artillery Force.

All domestic troops taking part in the parade have assembled at a training base in Beijing and at nearby airports. They will have trained for the parade for three months, Qu said.

China has held 14 National Day military parades, but it is the first time that a parade will have been staged to mark victory in the Chinese People's War of Resistance against Japanese Aggression in World War II.

"Through this year's parade, we hope to demonstrate China's adherence to the path of peaceful development, as well as its firm resolve to maintain world peace and defend national sovereignty," Qu added.

No rest until sweeping victory against drugs, President Xi says

China, US can be 'driver' of world peace