By Jian Ping in Chicago for China Daily(China Daily USA)

Professor Wu Hung's spacious apartment on the 17th floor of an historic building in Chicago's Hyde Park looks like an art museum. Paintings, photographs and sculptures by contemporary Chinese artists are displayed in every room, and the floor-to-ceiling bookshelves in his study are filled with hundreds of books on traditional art, especially Chinese art.

The contrast between the modern artwork and the traditional print books, in a way, reflects Wu's inclination to push boundaries in his studies and teaching.

Wu is the Harrie A. Vanderstappen Distinguished Service Professor of Chinese Art History at the University of Chicago.

He grew up in Beijing and studied at the Central Academy of Fine Arts. He went to Harvard University to study art history and anthropology in 1980 and obtained his PhD in both areas seven years later.

He taught at Harvard after graduation and in 1994, when he became full professor, he accepted the offer from the University of Chicago and moved.

"People were surprised," Wu said about his decision, sitting back on a sofa in his living room. "Especially my parents, because my father studied economics at Harvard in the 1930s."

"But I was at a moment in my career when personal achievements such as publication or status were shifting to a larger issue, that was to develop a program on Chinese art in America," Wu said.

He was convinced that the University of Chicago had made the study of Chinese art a priority in the humanities and he would receive the support he needed to reach his goals.

Over the next few years, in addition to teaching, he set up the Center for the Art of East Asia serving as director. He also worked as a consulting curator at the university's Smart Museum of Art.

Anthony Hirschel, director of the Smart Museum, has credited Wu for establishing the museum's reputation in the US and China as being at the vanguard of showcasing the importance and complexity of contemporary Chinese art. He praised Wu for "his charismatic leadership and penetrating criticism."

Wu, tall and friendly, knows most of the key contemporary artists in China and is responsible in introducing many of them to the US.

Wu is a specialist in early Chinese art, but his interest in contemporary Chinese art has led him to push the boundaries between the two conventionally separate worlds.

He has curated many exhibitions and written several books on contemporary Chinese art or on both traditional and contemporary, including Remaking Beijing: Tiananmen Square and the Creation of a Political Space (University of Chicago Press, 2005) and A Story of Ruins: Presence and Absence in Chinese Art and Visual Culture (Princeton University Press, 2012).

He is regarded as one of the foremost authorities in both areas.

Wu has laid down roots in Chicago, declining offers from other top-notch universities such as Yale and UC, Berkeley.

He has curated more than 50 exhibitions, covering a wide range of themes, time periods and art forms.

He travels between China and the US, playing a crucial role in the studies and exhibitions of Chinese art in both countries.

He also writes prolifically, releasing a book every other year. His award-winning record started with the publication of his first book written in English, The Wu Liang Shrine: The Ideology of Early Chinese Pictorial Art (1989). It won the Joseph Levenson Prize from the Association for Asian Studies for the best book in Chinese studies.

When his achievements are mentioned, he is nonchalant.

"I tend to be too absorbed in my work," he said with a smile.

He is used to working in his study in the evening, either preparing lectures or writing. At any given moment, he said, he is working on several projects at the same time.

"I like writing," he said, explaining that many of his lectures have been developed into books, which are published in either Chinese, English or both.

He considers studying Chinese art in the US different from China, but not necessarily to any disadvantage. A global context here enables him to compare Chinese art with other cultures and traditions, and associating with scholars from different fields helps him broaden his perspectives.

"I'm now trying to bring this model to China," he said, adding that China would benefit from this approach.

He also pushes boundaries in his teaching of students, quite a few of whom are from China.

"With the Internet and people's mobility, today's world is more connected and complicated," he said. He wants to enable the young to broaden their views and enrich their learning experiences so that they can find more ways to connect with global art.

"To teach is to transform," he said.

Wu is currently working on three lecture series on Chinese art that he will give at Shamghai's Fudan University in the fall, at Oxford University in England early next year and at the OCAT Research Institute in Beijing in the middle of next year.

Wu Hung has received many awards for his publications and academic services.

He said the ones that make him most proud are the Faculty Award for Excellence in Graduate Teaching at the University of Chicago (2007) and the Distinguished Teaching Award from the College of Art Association (2008). 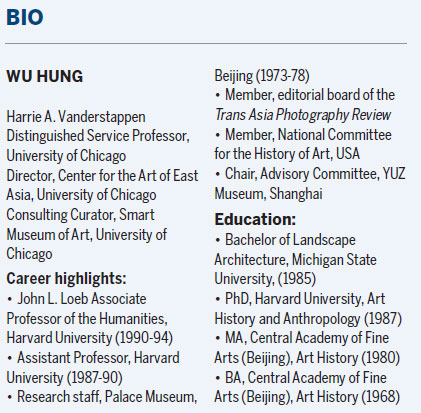 Deficit hits $104b in first half